I'm a big believer in model railways learning not just from other modelling disciplines but also from the world of theatre and the arts. There is, of course, a long tradition of this. 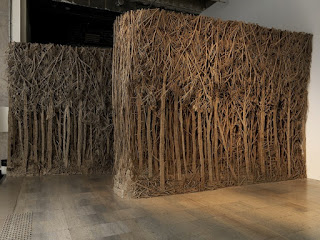 It strikes me that 4mm versions of these would work really well as a backdrop for a layout, and that they could even be moulded.
Posted by James Finister at 04:07 No comments: 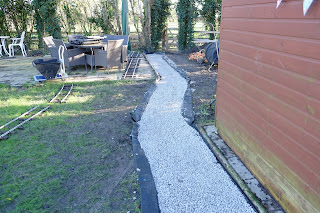 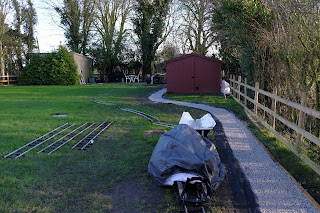 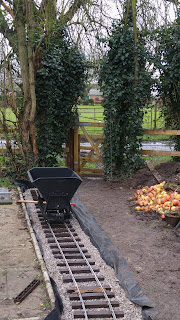 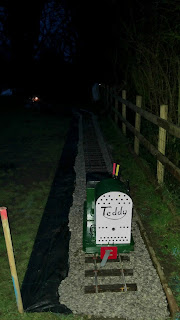 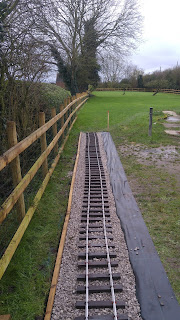 I was hoping to herald the New Year with the first picture of the Eaugate Light Railway earning its keep. Unfortunately the high winds have discouraged me from spending time in the garden so the fitting of fish plates has fallen behind schedule by a couple of days. It is a case of so near but so far. Just getting  a couple more track panels down will make a big difference in getting the track to a viable length, however temporary it might be.

My joy at the New Year, when many of my friends seem to have had life changing events, is somewhat tempered by the news that both Martin and Geoff were both taken ill over the holiday period.

My very best wishes to both of you for a full recovery.

Teddy has actually been hard at work over the weekend, working both garbage trains and taking logs to be split and stacked, and along the way totally proving the minimal railway concept in my eyes . Doing the same job without the railway would have reduced the garden to a quagmire.

I've been impressed by my wife's reaction to the railway. It is fair to say that future investment has been secured  and that the reality has far exceeded her expectations. I almost had to stop her giving Teddy a saucer of milk this morning when she opened the kitchen door this to see him waiting outside.