... was I worked out that the Scotchlok connectors used to connect the drop wires to the bus hadn't worked. As it happens this doesn't have a material impact at the moment  because for once my track-laying has been good enough to ensure electricity is flowing to all the right places. However I doubt that will remain the case over time. So I think I'm going to raid the tool box for some low tech chocblok connectors.

Fitting a collar onto the wire connecting the switch to the tiebar seems to have worked as well so I should be able to install that permanently one day this week. So if all goes to plan Saturday will be spent ballasting the track  and Sunday will be spent removing all the ballast and starting again building the over bridge. I can't describe how much I'm looking forward to moving on to the scenic work.

Posted by James Finister at 14:10 No comments: 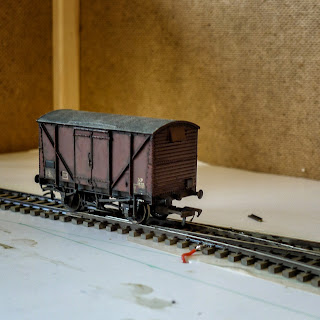 Posted by James Finister at 13:39 No comments: