OK, confession time. Not my first and it won't be my last.

I've often remarked that what catches tyro modellers out is the silly stuff.

Building the baseboards for Upwold had gone really well, and I was congratulating myself on the legs being relatively sturdy and how easy the adjustable feet made it to get the boards level. Not only that but I was also really happy with the working height I'd chosen.

Which is when I realised the implication of having decided to make the layout semi-portable.

Many years ago my brother was helping my parents move some furniture out of our house in Herefordshire. In those pre-Ikea days I think it had probably come from Waring & Gillow, but it was still intended for home assembly.

But not for home dis-assembly, as my brother discovered when by removing one part he caused the whole wardrobe to collapse around him.

Gentle reader, you will be ahead of me by now.

Suffice to say as I lifted one of the boards I had a brief Wile E. Coyote moment of utter calm just before the rest of the layout crashed to the ground.

Looking back I can see where I went wrong. OK a child of five could see what I got wrong, but probably not why I got it wrong. To accommodate the existing furniture in the office I abandoned my original plan to use trestles. Instead I decided to use simple plug in pairs of legs. To be quite honest if I'd put the layout up in the intended semi permanent home the unexpected consequences of taking it apart wouldn't have been that bad, because the units it is fitting in around would have kept most of the pieces in place. But setting it up on the (patio/terrace/slabs - delete as appropriate) meant the safety net wasn't there.

So back to the drawing board. I suspect it might just mean building a different set of legs if Upwold ever goes on the road.

In the meantime I've not been making much other progress to report on. Once again lots of disparate jobs are progressing slightly rather than having any single project making significant progress. I'm hoping for some big news on the building front very soon though.

As a taster the guys at Lcut have taken on board some of my comments about their small signal box kit and both increased the size of the door to 4mm proportions and, much more impressively, managed to cut recessed windows. 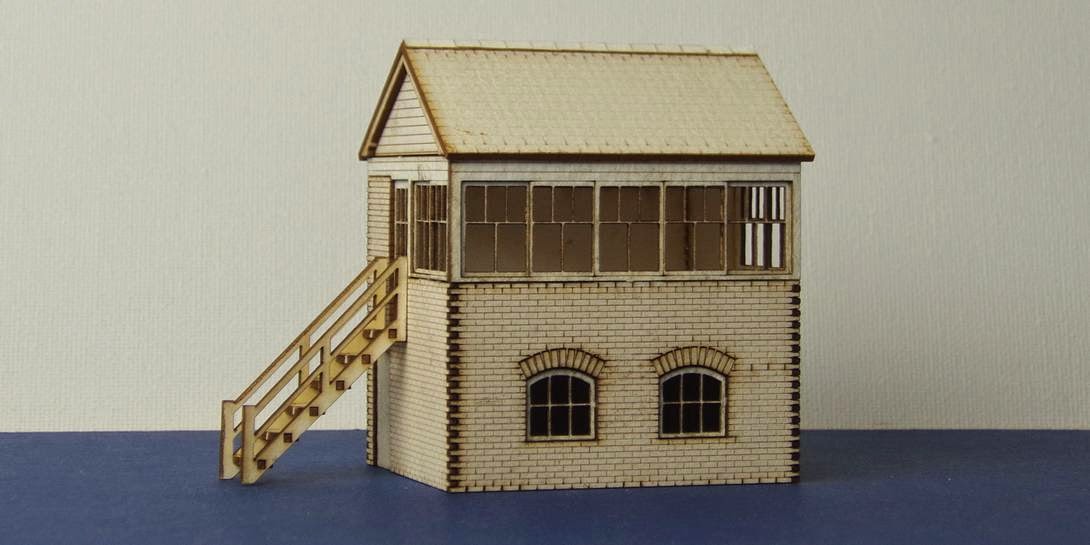 This remember, sells for the pocket money price of  £6.00 when other laser cut buildings are being sold at premium prices.