The Joy of Books

Moving into the new studio is a protracted affair. I suspect It won't be complete for another year as things get juggled around.  Progress is being made though, and most of my key railway and modelling books are finally accessible again. It isn't the same as having the dedicated library that we had in the old house, but that isn't all bad. 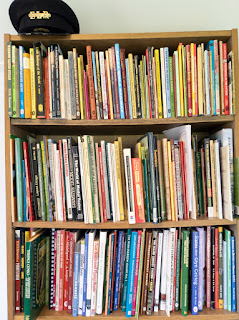 Moving did mean an awful lot of books going to charity shops. Most of them were fiction titles. Some were old friends from university days and before but it seems silly to use up precious space in the cottage when they can all fit on my Kindle and go with me on my travels.  It is also true to say that whilst in the old house Issy considered books to be "mess" in the cottage she sees them as adding character, so they are to be found in most rooms of the house. I just hope she never realises the combined value of the books in the photography section.

That raises a key, if morbid, point that many of us don't give our partners an indication of what is particularly valuable in our collections, be it in terms of monetary value, historical interest or just the things we would like to keep in the family as long as possible.

The original subject of this post was going to be the disparity in my books between those about making the best use of RTR models and kits, and those about scratch building. This is especially true when it comes to books about building structures. Putting them all on a single bookcase seems to have really highlighted this.

When I started Apa Valley I intended to scratch build all the buildings, but I did end up using a repurposed Hornby moulding for the wooden platforms and an Lcut signal box. I did have a couple of other signal boxes in mind and half-constructed both a scratch-built and a kit-bashed version, and one of them will end up on the next TVR based layout. For me the TAoC layouts need to use commercial kits to be in the spirit of Roy's original design. The ones I have sourced are very good, though not without issues. The problem is that those issues aren't easy ones to solve. And even if they can be solved do I still end up with people saying "Oh look that is xxxx kit of....." rather than "That is nice model of ....."

I think the scratch builder in me might win this particular battle.