A Workbench to call my Own

This blog can sometimes read like a long litany of excuses for why I haven't done any modelling. In my defence it is worth remembering, because even I forget, that in the whole time I've been writing it I've never had a dedicated modelling workbench.  Everything has been produced on the odd two square foot or so of space that I've found on top of cupboards or on the edge of a desk shared with a computer and printer.

In fact, I was shocked to realise that it is eighteen years since I last had a dedicated modelling workbench.

In the longer term, post lockdown, I'm going to get custom benchwork in the studio. In the meantime, I'm making do with an assortment of cupboards, some dating back to my first flat, but I still don't have a workbench.

Or at least I didn't until I decided to reward myself for finally sorting out the boxes. Well, most of the boxes.

It isn't the world's greatest, but it was cheap. In fact it is dreadfully cheap and cheerful and proof that you get what you pay for. I bought a cheap stool to keep it company 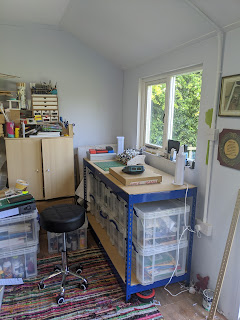 But it is a workbench to call my own for the first time in eighteen years.

Eventually it will end up in the Big Metal Shed as part of the ELR's workshop, though not for anything involving precision.

The box sort out revealed a few surprises, most notably three OO gauge shunters that I'd completely forgotten about. This is rather good news because one of them was a Sentinel and another a J70, both are ideal for the Casket Yard inspired layout. The other one was an old Hornby Pug which I'd earmarked for conversion to EM. I'm still not sure what to do with that.

I'm in a quandary about OO9. I had decided to put it on the back burner but I really have a lot of nearly completed locos and it seems silly to leave them unfinished. On the other hand it is all taking up space I wanted for other things. Time for a ponder. I'm thinking a halfway house between the current layout and the planned larger version. In effect a diorama of the station and sidings at Cadeby to display the locos that could later be extended to become a proper layout. Such a diorama would quite suit an Apa box.

Something else I need to ponder about is couplings. I seem to have accumulated trial packs of various sorts over the years without ever settling on anything. If/when I return to EM I feel inclined to finally give Alex Jacksons a go. I've noticed DGs in use on an increasing number of exhibition layouts, if you remember such things. Actually I had to look quite hard to notice them in the flesh, though they seem more obvious in photos. To date, I've had the most success with Sprat & Winkles, but I don't really like the big hooks. Iain Rice has a design for something similar but with a wire AJ style hook and I'm tempted to use the approach if I don't succeed with the AJs.

Finally, for those interested in musical trivia, here is a link to some photos of my old workbench in Herefordshire when it was being used by a  real craftsman, the late Bernard Ellis who made the mandolin used on Tubular Bells.
Posted by James Finister at 04:21