May Day reminded me of the bank holidays of my childhood: Driving rain and gale-force winds. As a result the studio has sprung several leaks, though thankfully at the office end, not the workshop one. Still as they used to say "'Ne'er cast a clout till May be out"

I might not have cast any clouts , but I did shovel a lot, and I mean a lot, of goat and chicken poop moving around the big compost bins to accommodate the new home for the chickens and the ELR's trailer. The big move itself will have to wait until calmer weather.

Meanwhile,  with the 7/8th trial track lifted I need to find a new home for it. I'm sure I've mentioned before that I find it harder to home a railway in this big garden than in the smaller ones I'm more used to. I suppose my criteria are more complex now. It has to be relatively hidden both from public view and from livestock, not impinge on plans for the ELR or the (future)use of the garden, and not make mowing any more of a pain than it already is.  If ever we build the planned big wildlife pond it will be a no-brainer to run it around that, but that is a good five years in the future.

At one point I considered running it along the dyke, but now that has been cleared out I don't think it is feasible, which is a shame in some ways because it would have added a striking vertical dimension. On the other hand, the idea of putting it on the other side of our fence is still an option. I should add that our fence is well within the perimeter of our property, because it is there to keep dogs in, not people out.

Or, in the short term, there is the new vegetable patch, which I really need to focus on this year. Currently, it is a mismatch of the old fruit trees, the compost bins from the days when we didn't use a mulching mower* and the hurried relocation of the raised vegetable beds to avoid the attentions of the livestock.

One of the raised beds will be used for a simple 16mm layout, primarily for use of grandchildren, but I'm thinking about consolidating the old compost bins to provide a base for the scenic section of 7/8ths 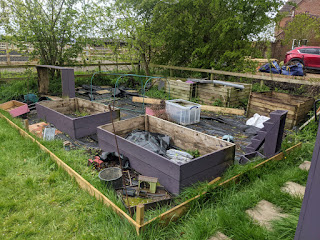 *I had real concerns about adopting mulching rather than collecting grass to go in the compost bins, but if you cut frequently, slightly more than you might be used to, it works really well. I still use a collection box for mowing within a yard of the paths and house to stop it staining the paths or getting trodden into the house.