I don't know about you, but that last post from a month ago really got my hopes up about there being some rapid progress.

That the progress has not been obvious comes down to a number of things that I guess some of you will recognise. First and foremost I had a busy period at work which not only took up my time, but also that small part of my brain that I need to work out the 3D jigsaw aspects of construction.
Second there was the very question of that 3D jigsaw, and exactly how some things were going to fit together, and in what order they need to be built. Without that being clear in my mind it was hard to break the tasks down into the small manageable chunks of time that I can devote to the hobby. Third I packed all my modelling stuff away to deep clean the office/hobby room and I'm only just beginning to remember where I put things. Incidentally for a small layout the bits and bobs need for construction seem to take up an awful lot of room.

If I'm honest there is also a fourth reason that is more significant than it should be. I broke the linkage between the DPDT switch and the point tie-bar. This was always a bit of a lash up and I knew I was pushing my luck but it was still dispiriting, and I also didn't want to carry on with scenic work until I was 100% certain the track work wasn't going to be an issue. It is a five minute job to fix, but until I got a chance to dash out to a model shop I didn't have the small piece of tube I needed to reinforce the connection.

That I've managed to get hold of the tubing today is largely because I've also bitten the bullet and taken a week off work to get some chores done, and I'm at the stage in construction where work on the layout feels like a chore.

So what am I actually doing?

The focus this week is mostly on the bridge that provides the exit from one end of the baseboard. This is based on the bridge still standing at the site of Blodwell Junction. The drawing I used for the initial mock up was a copy of the one in Mike Lloyd's excellent book on the Tanat Valley. For a number of reason's I've had to adjust the design of the bridge to fit the layout, so that drawing has acted as a guide rather than anything else. I also struggled to work out the relation of various elements of it, so I've produced my own drawing in 3D using Sketchup. 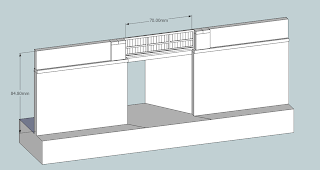 I guess I could write an entire post about my love hate relationship with this software, I used to use it a lot when it was a Google product but knew that not having used it for a couple of years I was going to have a sharp learning curve getting to grips with it again, even for a project as simple as this.

Anyway, here is a view of the mock up now with this latest version of the bridge in place. 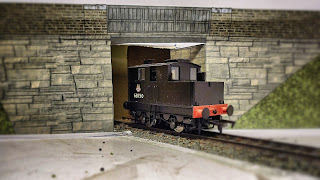 Just for now ignore the stonework and the grass area, this is very much a  maquette.

So now I'm in the middle of building the first 3D iteration of the bridge. I'm doubtful how well this first attempt will work, but then this has always been a learning exercise
Posted by James Finister at 15:40