Shall we move swiftly past the little issue that yesterday I managed to superglue yet another DPDT switch solid and move on to the question of buildings?

For the first time since I started construction of this project I feel that I'm on familiar ground, and I'll be honest it feels rather good. In retrospect I now think I should have started by building some of the structures rather than with the aspects of layout construction I'm least confident about.That might have given it all more momentum.  Looking at the longer term the Llanrhaiadr Mochnant  layout should at least benefit from being able to initially reuse these buildings, even if I want to build Mk2 versions at a later date.

The goods shed looks like it is is going to work fine as the scenic break it is intended to be, hiding that this is a "bitsa" station. As always the size of the actual models seems very different from the original card mock up, but still acceptable. One point I didn't pick up when first planning things is that the non rail side of the Tanat Valley goods sheds is completely blank, with the door for vehicle loading at the end. The downside for this is that the lorry parked alongside the shed, which is very much part of my overall composition, now will be just parked there rather being in the process of being loaded. 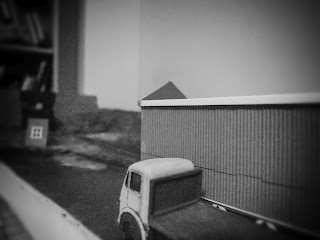 Still judging by photos of the real TVR in the 50's and 60's the main purpose of the goods yards seems to have been as a lorry park, so all is not lost. Hopefully some weathering will break up that long expanse of Wills sheet as well.

Just visible in the photo is a very out of focus and backwards leaning trial run at the front of the weighbridge hut from Llansilin Road. I'm still not sure about this and how it will impact various lines of sight.


The gents/shed on the platform still poses the dilemma of whether to build it from the thin transparent Wills corrugated sheet or the thick stuff. I suspect it will be a combination of the two.

I've written enough about the signal box for now. The next stage of construction is awaiting delivery of a Chopper II to bring a little more accuracy to the table. I will post later about my stupid mistake with the point rodding and how I got misled by a combination of a single picture and forgetting that I'd swapped some of the features of Blodwell junction around. I might try and rectify this at a later point but not now.

Actually there is an alternative plan, that involves a major rethink of the whole signal box issue..but laters.

I've also decided to include one of the station buildings on the platform. I wasn't going to originally because I wanted to convey a sense of desolate abandonment bearing in mind the line is set after the end of passenger services. Having played around with mock ups though I think a waiting room will work but I'll build it without the ladies' on the end.

Email ThisBlogThis!Share to TwitterShare to FacebookShare to Pinterest
Labels: Buildings