In the absence of a signal diagram for Llanrhaiadr Mochhnant I thought it would be relatively easy to convert the signal diagram of Llangynog. Here's one I did earlier. 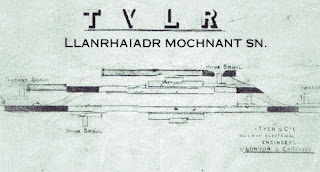 It seems my Photoshop skills are a bit rusty, because it has taken an hour and I really need to start again. 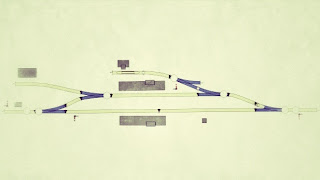 So I did, this time using Anyrail to produce the basic diagram. This is just the basic export tweaked in Snapseed. The next step will be to combine this with the text from the version above, and another version with the switches in yellow so the blue indicates the alternative route. And here we have the finished version: 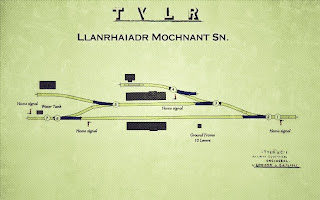 Why am I doing this? Well I'm enjoying the challenge, of course, but if I ever do build LM it would be useful supporting material for display with the layout. The main reason I'm doing it though is actually to check that I've got the point rodding arrangements right. I think I'm now pretty sure what went where now. Well almost, I'm not sure if I'm right in putting a facing point lock at the up end and that there isn't a second catch point to protect the running line from the loop at that end. What I do know is that there are two sets of point rodding running in that direction.