A sunny and relatively windless evening gave me a chance to put another couple of hours work into the new wagons. As a result I managed to run the first one just before poor light stopped play. 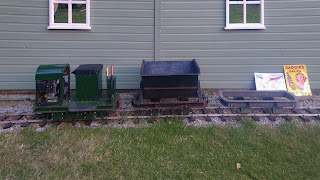 I still need to add the brake lever, but I want to do that in good light so I can give Colin updated photos for the instructions. It also doesn't yet have the buffer plates because although I've trial fitted them I want to paint the frame before adding them. 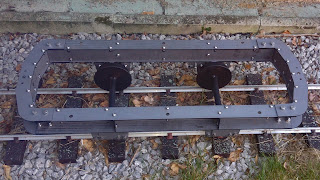 Having got used to lugging the frame around in just one hand whilst it was under construction it was a bit of a shock to pick this up after fitting the wheels. Two hands are definitely needed, but  it is still light enough for one person to move.

The other wagon isn't far behind, but is awaiting tomorrow's delivery of a few more bolts before I put it together. In fact now I know how easily everything fits I might paint that one before final assembly.

I even found time to quickly trial out one of the de-mountable bodies. This one was a bargain buy from a vintage shop. You may recognise that in other photos I've been using it as a workbench. I'll be adding some angle iron reinforcement before it enters revenue earning service. 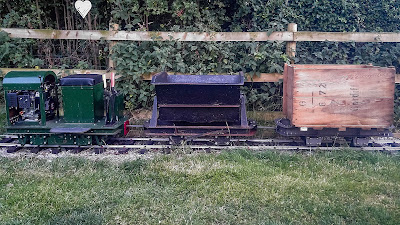