The forecast of a spell of warm Spring weather, and the prospect of losing five days of annual leave that I can't carry forward, finally persuaded me to take a week's holiday at home. I was actually surprised to realise it is the first week I've taken off since July.

It might seem odd to some of you to take a holiday when people are homeworking, business is quiet, and sensible people are self-isolating.  The novelty of home-working wore off many years ago, so unless I force myself to take time off it is just like working in the office, only with longer hours. The wet start to the year also means I have a big backlog of tasks. To put it in perspective, this weekend I walked sixteen miles without leaving the garden. If nothing else, that is proof that the ELR needs to be extended.

The big job for this week is to move the vegetable garden as far away from the chickens and goats as possible. That, unfortunately, is also where I was planning to put the 7/8ths line. Whether or not railway and vegetable plot can co-exist is something I'm going to have to think through. It might be possible in some form but not the one I intended. Another big outside task is to start putting in a loading dock for the ELR  in the eyesore space created when we had to remove a stand of sycamores. How far that progresses probably depends on how timber I can salvage.

The other big project is to start organising the studio. Leaving aside that many boxes of books and model railways haven't really been unpacked since we moved here four years ago it is still chaos as a result of the shift around of rooms last year. It is amazing what I'm finding that I'd completely forgotten about, likes these 7/8ths kits from Model Earth 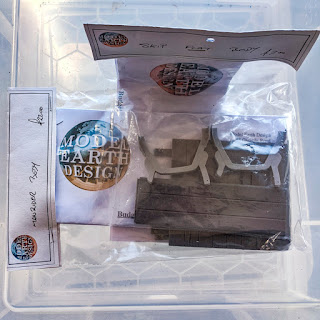 I suspect for the next couple of months 7/8ths will be my main focus, since I had so many part completed models on the go last Autumn. After that, the layout in a box takes priority as a precursor to TAoC.

My O gauge ideas are firming up. I want to make use of some of the RTR locos available whilst not falling into the trap of being derivative. I love the Minerva Manning Wardle, for example, but it is so common on exhibition layouts these days. I'm homing in on the Leomisnter-Bromyard branch at the moment. I know the route really well, having lived near Leominster, on and off, for some twenty years, albeit in what now feels like a very distant past. Station layouts were relatively simple, and there is even scope for a narrow gauge interchange. I'm imagining a variation on Llanastr with a solitary 57xx as motive power.