One of my very few skills is the ability to talk about my chosen subject in front of a large audience for hours at a time without any notes. Luckily for me, it has proven to be quite a lucrative one. I've never really analysed it but I suspect one reason I can do it is my rehearsals don't focus on learning fixed words, but on telling a coherent story. 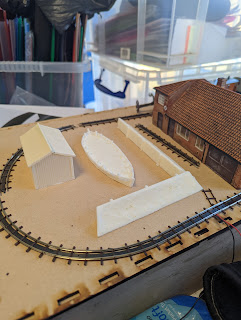 What is a strength in one area is often a weakness in others. It has struck me that one reason I find building layouts difficult is that I need to have that complete picture in my head as a mental model. The only two big layouts I have built have been my old 16mm line and the ELR. In both cases their physical size was balanced by relative simplicity.

Building the original Apa Vally I found I could "take it with me" in my head when I was travelling for work.t I could mentally visualise it and what I needed to do next. Conversely the things that sometimes get in my way are as simple as trying to visualise where the wiring of a turnout will go. I have that problem with the Peco threeway point, which is a pain in the neck when I have two schemes that use one.

When I say I can't visualise it I don't mean what you are probably thinking. Here my dsypraxia comes into play again. but it is very hard to explain. Let me give you another analogy. When I'm in a busy pub at Xmas time, with lots of different individual conversations going on, my mind gives up. I'll explain it to people by saying that I can't hear them, but it is much deeper than that. It doesn't help if they speak louder to me, and it isn't just my hearing that is affected. In model railway terms it isn't that I can't see, an image, but that too much is going on, and changing, for me to make sense of it. Oddly there are other complex situations where dyspraxia works in my favour, cutting through Gordian knots.

The good news is that with the OO6.5mm project I DO have the whole model in my head. OK, there are a few things I've not yet made my mind up about, like the backscene, and a couple of ideas I have concerns about, but they are manageable for this Bear of Little Brain.

Actually, whilst minor, the ideas that I have concerns about are, perhaps, interesting.

The track plan is a simple small oval, but I think I can largely disguise that. My concerns are that in doing so I'll reduce the attractive viewpoints. There is also a question in my mind about the fictional backstory for the layout and how it justifies the trackplan.