A few days of nice weather, plus an impending bonus, has rekindled some of my enthusiasm for the garden.

With the back garden, or at least the grass, back on the way to recovery from the goats I think it is time to replace the old laurel bush with a pond. We have a bigger pond planned for the front garden, but this is just intended to attract a bit of wildlife in the meantime.

Of course, you can't build a pond without putting a railway around it, so I thought I might as well relocate the 7/8ths line. There is a bit of a challenge in that I still need to allow room for the ELR to run safely alongside between the fence and the pond, but at least I'm considering options.

And before anyone mentions it, I know the pond is meant to be the other way up. 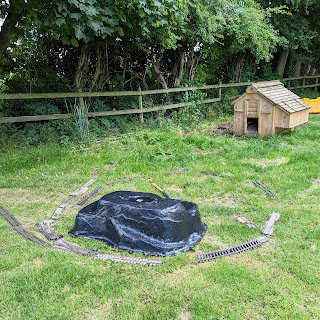 I've also been out surveying possible routes for the ELR. Considering grandchildren mean the focus is shifting towards a continuous run around the back garden ahead of the extension to the office.

Also with grandchildren in mind I'm thinking of building a simple 16mm track in one of my old raised vegetable beds, but I need to discuss the final site with the boss.