One of Those Days

Some days things just work really well, others seems to go wrong from the start.

The day before yesterday things were going well. The baseboard was in place, I'd figured out the best way to operate the turnout, and goodness knows why but I was beginning to convince myself that perhaps even that switch to EM gauge was within my grasp, egged on by the discovery of just how cheap the Ultrascale conversion kit for for the Sentinel is.

Yesterday though began badly with the step-daughter letting all four toy poodles into my bedroom at far too  an hour, a misdemeanor compounded by the fact that one of our cats was already in prior residence. It wasn't a peaceful awakening.

When I unpacked the point motor I had carefully checked the thin wire supplied to connect it to the tie bar and then re-secured the wire into the box. The wire is now nowhere to be found. It was when I discovered it was missing that I should have given up on the day from a modeling perspective.

Instead I went and ploughed on with the Ratio 4 wheel coach kit.

I know that some beginners produce stunning work. I suspect they also benefit from excellent close up vision, good hand eye co-ordination, live alone, and before embarking on their first project have already amassed a carefully organized micro-workshop.

However careful they are I doubt their vision means that one eye is convinced things are at least an inch away from where the other eye places it, that they need  an obscene number of cups of coffee to get through the day, share a house with far too many pets and has a workshop that shares desk space with the home office and digital darkroom. Once upon a time I did have a decent set of tools but they got "mislaid" during a house move.

So what followed was an unmitigated disaster.

We will skirt over the bit where I remembered too late why you don't use the home decorator size brush in the lid of a bottle of poly to apply the stuff to anything delicate, awkward to hold or hard to get at. We might even miss the bit where I recalled that on old kits cutting off the badly moulded location pips and aligning things by eye and measurement is usually easier. No, actually lets go back to that one. I was focused on following the Ratio instructions about which sprue pips to leave on for location purposes, and also had read lots of warnings about how difficult the lower stepboards were to remove from the sprue that I failed to notice that the horizontal cut out at one end in the stepboard was missing on both mouldings. Had I picked up on that whist the mouldings were still on the sprue it would have been relatively easy to rectify. 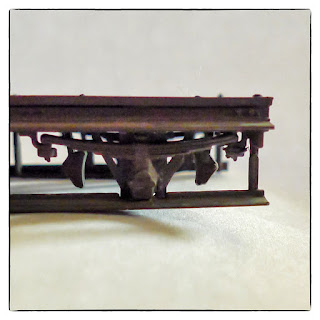 As it was I didn't discover this until I was trying to work out why I couldn't get the stepboard to fit the way I'd expected, so ended up glueing them in the wrong position, too far forward and too low, and the only way I have of rectifying it would mean a lot of bodging.

I'm tempted to chalk this one up to experience, finish building the body, and then build a replacement using the Mainly Trains etched underframe.

Then on top of everything else my jigsaw died on me whilst I was cutting the end boards to allow connection to the fiddleyards.