I had a cunning plan

My cunning plan was to use one of the digital trainsets on the market, knowing that I wouldn't use half the content of the box, but possibly recovering some cash via ebay.The advantage of this in theory was I would get a DCC set up, including two locos, that I knew would work.

So I went ahead and pre-ordered the Hornby Mixed Freight Set for considerably less than the current price.

Now I have a sneaky suspicion that when I ordered it the box art featured a Jinty and the  08 from the main range. I noticed soon afterwards that the steam engine had changed into the J83, which has always struck me as an odd choice of prototype. On the other hand it does  bear a passing resemblance to my much missed Triang Nellie so it isn't all bad.  Actually since the Hornby model is such a poor approximation of the J83 in the first place I might just paint it blue and annoy the purists.

The real disappointment, and I should have guessed this, is that the 08 is the inside framed "Railroad" version.

Well at least I've got two chipped locos that run, and I suspectg run better than the non DCC version of the basic Hornby 0-6-0. Once upon a time the solution would have been easy becasue it seemed that every whitemetal kit on the market was designed to fit the Triang 0-6-0 chassis. Things have moved on though. Well if nothing else I have a couple of donors to try out some loco-bashing techniques on.

Then there are the wagons. 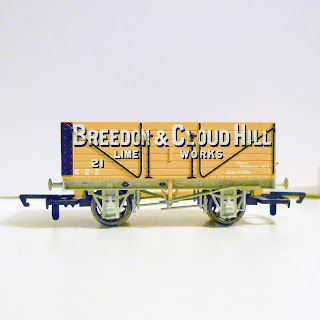 Well again they are as absic as you can get these days. Actually for the toy market they aren't a bad compromise. Those tension lock couplers come as a bit of a shock having got used to the Bachmann NEM pocket variety but will soon come off., as will the lugs attaching the body to the chassis. I'm stuck with the solid brake lever.

Nicely printed body though. A pity Apa is set in the period when PO wagons were already a thing of the past. So some heavy weathering is underway to represent an ex-PO wagon that has had a quick coat of unfitted gray paint many years ago and is now fading back to a mixture of bare wood and the original livery. You know it is already looking a lot better. 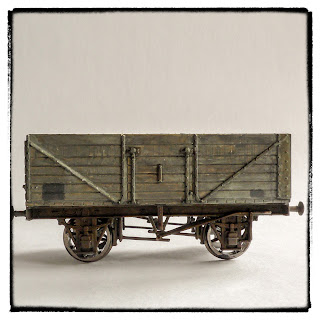