In yesterday's post about the Warley show I focused on the layouts. Of course they are just one part of the show. A considerable amount of floorspace, and the attention of the visitors, is devoted to the traders, and perhaps to a lesser extent, on the demo stands.

Not for the first time at Warley I went with a small stash of spending money and a long list of things to spend it on, and came away having spent nothing but the price of a pork bap.

One great advantage of the NEC compared to some venues is that at least there are cash dispensers available, and judging by the queues for them other people were spending money even if I wasn't.

The layout of the hall is zoned, so a lot of the big name traders were clustered around the entrance and the first couple of aisles. Unfortunately this added to the sensation of over-crowding, especially when sharing space with those whose enthusiasm for their own interests over-powered any awareness of others. I saw several children knocked over, narrowly avoided a few carelessly swung rucksacks myself, and felt for the disabled visitors. Perhaps the 16mm AGM where access for the less able and an emphasis on space has spoiled me. Actually it isn't as though the space wasn't available at Warley but some of it wasn't well used. One thing they do get right is the provision of a lot of seating space and food outlets. Then I'm a sucker for a pork bap.

I did get a chance to look at some of the delights on the Kernow stand. Unfortunately my lack of note taking means I'm not sure if it was there or on the Howes stand that I saw the prototypes of the Heljan AC railcar which is definitely on my list for purchase in the new year.

I've had my eye on the Hold and Fold from Eileen's Emporium for some time but decided I can't currently justify the cost. I'll be reporting back soon on an alternative at roughly half the price. I suspect the difference in quality will show, but my needs are relatively simple at the moment.

I wish I'd taken the time to speak to more of the DCC specific traders, especially DCC Concepts and Train Tech. The former because their web site is so badly designed, the latter because I need to convince myself their one touch point control system will work. The trouble is I'm at that stage of being so new to DCC that I don't know what questions to ask, and a busy exhibition stand doesn't seem the best place to start.

A lot of the manufacturers and traders I was most interested in were at the far end of the hall in the MRJ Small Suppliers section. This was good in that the stands weren't busy with the general public, but bad in that by the time you got to it exhaustion was setting in. Whilst I didn't buy anything  - I nearly succumbed to the Deans Siding Neath & Brecon tank to use up one of my spare 0-6-0 chassis -it was useful to see things in the flesh. I think I had the typical male response of being overwhelmed by choice.  Next year I think I'm going to do the show in reverse order and start here.

The two stands demonstrating Rail Simulator are worth a positive mention too. They seemed to really engaging with the audience and also showed how the graphics have improved with the current incarnation. Unfortunately my current PC doesn't have the spec to do it justice. 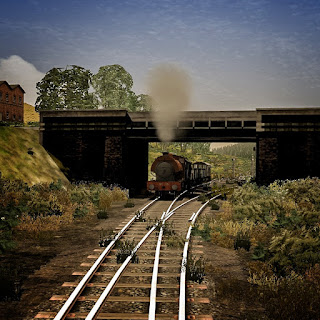 Finally a mention for the demo stands. Again putting these towards the end had the advantage that they were less crowded, and the disadvantage that time was limited when I got there.  I'm notoriously bad at planning visits to demos at exhibitions and next year I'll aim to have a more targeted approach.

On reflection I can't help thinking that my personal experience of a show like this is inseparable from where I am on this project. Normally I would have spent most of my time looking at the narrow gauge layouts and the big show piece layout and the traders selling the more idiosyncratic products. It felt quite weird being attracted to GWR branchlines and those traders selling the bits and pieces needed to build an atmosphere of total mundaness.