A Question of Logic

I've had my thinking hat on again, in another attempt to synthesize Lanrhaiadr Mochnant and The Art of Compromise to produce a version that won't take up too much space in the office.


Compared to earlier versions I'm planning to swap the viewing side over, so the goods shed will be at the front, as it is on Apa. Compared to the real LM the big changes are the replacement of the level crossing with a bridge and moving the main platform  to the down side of the loop. A quick reminder that in any case the model is going to be set both after passenger working ceased in 1951 and after LM became a terminus in 1952. Changing the level crossing for a bridge means I have to decide where to put the motley collection of sheds and the weighbridge. I suspect I won't reach a final decision on that until I place some mock ups on the baseboard. I don't think there is actually an obvious on scene location for the weighbridge that makes sense . A couple of other bits of the jigsaw have now fallen into place, including where the iron mink stood that was used for additional storage in the yard.

The jigsaw I'm not so sure about involves the points and signalling, because some of the edges of the puzzle are missing. Literally so when it comes to photos.

You might need a pen and paper for the next bit....

What I do know is that the LM lever frame had twelve levers, and Mike Lloyd records ten of them being in use at some point in time. I'm fairly certain that four levers were for signals. I know that three sets of point rodding ran along the downside of the line and I'm presuming two of those operated the points at 7 and 8. I'm guessing that point 8 at least had a facing point lock, which could account for the third rod, though the onlyTVR  FPL I have a photo of, at Llansilin Road, appears to have been operated off the same lever as the point.

Is it possible that point 7 didn't have a FPL because passenger trains wouldn't have used it in the up direction, or would it have had an economical FPL? In that case though wouldn't the FPL' for points 7 and 4 have been of the same kind, so why would they need rods from the lever frame?

Three sets of rodding run alongside the up platform. One crosses under the loop at the end of the platform and controls point 5, so I'm guessing the remaining two control point 4 and its FPL.

That by my calculations comes to eight sets of point rodding, and four signal cables.

So the next question is what levers would have controlled what, and how would the interlocking have worked. Using TRAX 3 this is my best guess so far 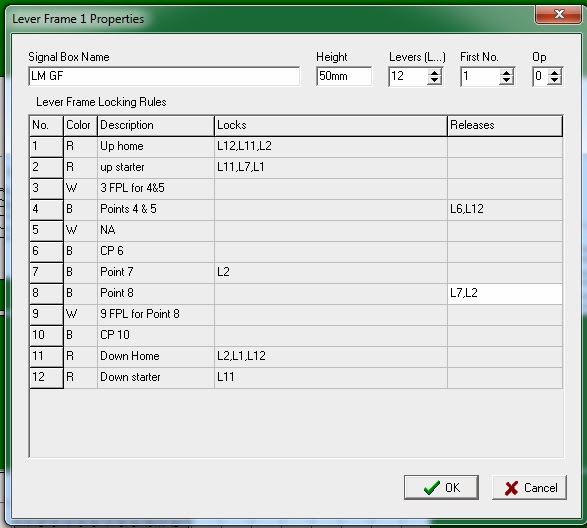 It seems to work for most of the obvious movements and conflicts I can think of. When/if I get around to building it I'll be using DCC so at least I'll be able to amend things. Any advice and observations at this stage though would obviously be more than welcome.
Posted by James Finister at 10:59