Having spent a considerable number of the last 99 blog posts procrastinating about building a signal box it seems fitting to use the 100th to unveil that Apa now has a signal box. 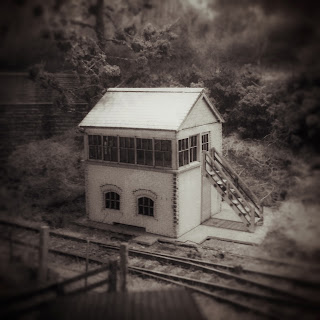 OK, there is a lot of work still to be done on it, especially the brickwork on the corners, and the roof section is still separate whilst I make my mind up about whether to fit an interior. The base it is sitting on is temporary as well. 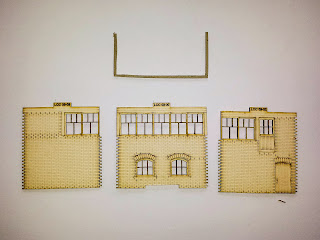 The attempts to add relief to the flat out of the box walls have had mixed success. On reflection I think I've been too subtle about it. but I think I need to wait and see what it looks like when painted.

Overall I think it has improved the overall composition of the scene. Its final position will be over to the right rather more so as to better relate spatially to the weighbridge hut from my normal viewing position in the office chair. Looking at the picture below it bigger than it does in the flesh for some reason. Possibly that is because of the overexposed roof.

The theory of the original plan was that the signal box would draw the eye away from the ends of the box and distract you from noticing that only half the station is modeled. My first impressions is that it has worked and it is also pulling the eye back from the join between the back scene and the hedge.