I've finally managed to pick up a couple of 14XXs off ebay, one GWR Airfix and one BR still in a GMR box.

Both are destined to have Mainly Trains detailing kits applied to them, and one at least will end up on a Comet EM gauge chassis. The other might end up being retained in OO form at least until Apa Valley ends up in the bin an Llanrahaiadr Mochnant rises from the ashes. 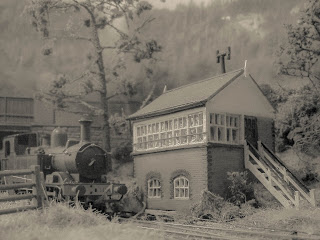 Until then I've been getting a few jobs done post Warley. I've changed the line of the wooden fencing so it doesn't obscure the signal box in photos and made a start on adding foliage to the trees at each end. The stove pipe on the signal box is now a more realistic height and the area where the rodding comes out of the frame room has been tided up. I still need to leave a saucer of milk out for the cat though.