Did I really think I could build Grundy's yard mostly from the store cupboard at a low cost?

Well to be fair, I have mostly been using the storecupboard. It has provided the track, the ballast, the baseboard, the trackbed, most of the scenic materials, most of the electricals, and pretty much all the stock I'll need.

Yet I've still spent a fair amount of cash. 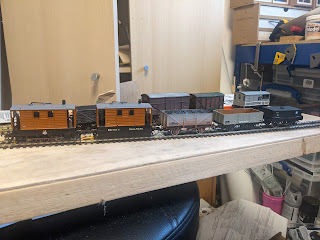 The biggest single cost has probably been couplings, and this photo lets the cat out of the bag that I'm using Kadees. I came very close to retaining tension locks, since I'm not planning to re-gauge any of the stock to EM. It feels like a big investment, but I have two other projects where I'm planning to use them anyway so I will be able to spread the cost out. It might seem odd, given that I've never built an exhibition layout in my life, that my choice was partly based on possible exhibition use and what I've observed on exhibition layouts. Which is, essentially, that at exhibition viewing distances Kadees are no more obvious than S&Ws.

Then there is point operation. I discovered I had fewer wire in tube components lying around than I thought I had. I suspect actually that means I can't find them and one day will open a box to discover a hidden stash. The layout does only have the one, three-way, point, but I  wanted the freedom to operate it from front or back. The baseboard I have lying around also dictates that control has to be surface mounted. Rather like the couplings the cost mounted because there was no way to buy just the components I needed for this layout.

Having said which I realised afterwards that I'd forgotten about another idea that, I suspect might be more robust and cheaper in this situation.

Finally, there have been all the little things that add up. Appropriate buffer stops, a water crane, and a brake van. I suspect I'll probably need to top up some scenic materials as well, and some figures and a lorry, perhaps.

I still think that when I add it all up and share the costs across other projects I'll have spent less than £60 specifically on the finished layout. But I reckon I've spent at least twice that on initial capital outlay. Then there is the value of the things I already had to hand.

The title of this post alluded to complications as well as costs, though obviously there are links between them. Oddly, and this applies to my day job as well, striving to simplify things can add complications. Mechanical point control in this case will probably end up costing me more than using Peco point motors and built in microswitches, as well as being less foolproof to install. Other coupling systems would in some ways be less complicated to install. Opting for possible operation from front or back has definitely complicated things. As has going for keeping everything above the baseboard. Mind you, needless to say, as work has progressed I've come up with ideas for doing things differently next time that might genuinely make things simpler.

I alluded to exhibitions earlier. I very much doubt this ever will make an exhibition appearance. However, that remote possibility has been part of my thinking, partly because the subject is of local interest and I'm involved with local heritage groups, so who knows. The "what if" exhibition scenario is definitely behind my desire to have it operable from front or back, particularly in a post-Covid world where exhibitors will be encouraged to social distance from attendees.