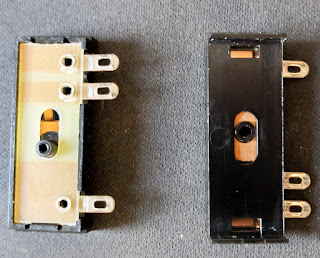 I think I've mentioned that I'm building Grundy's Yard on an old baseboard that doesn't really suit under baseboard wiring and point control.  Even if it did, I would still be trying to keep as much as possible above baseboard. The Cadeby layout suffered badly from being turned over so I could work on the electrics, especially the trees, which lost much of their foliage.

I've never been happy with my various attempts at manual point control. They have worked, but always felt a bit Heath Robinson.  When work on TAoC recommences I'll probably use Blue "manual" turnout motors. Some would quibble about the cost but I want something that will be as foolproof and reliable as possible. Having said that I could even use the Morgan Design TOUs again.
Back to Grundy's Yard, I  want something foolproof and reliable. I'm using Mercontrol to operate the points, the question is where to place the microswitches, and what type to use. Where to place them depends on whether I value accessibility more than reliability. The type depends on the location

What would make life very easy would be if the Peco undertrack microswitch could be attached directly to a turnout, rather than to the point motor, and had arms to attach an operating wire to. I'm wondering if I could adapt them in that way, possibly in conjunction with the adaptor base. I'm also hoping that the tolerance that seems to be built into Peco's products designed for use with their somewhat brutal point motors might avoid the need for omega loops, which would be one less thing to hide.

Perhaps counterintuitively, I'm trying to avoid soldered joints in the wiring. That isn't because I don't trust my soldering, but as we know soldered joints do fail, and given the surface mounting I don't really want to be waving a soldering iron around in close proximity to the scenic stuff.

I have a horrible feeling that I'm about to fall into my usual trap of embarking on a project partly inspired by stuff I have lying around and then using something completely different. Yes, I have considered biting the bullet and building a new baseboard. I might still. The deciding factor will be a decision about how I'm going to display the layout. I'm normally passionate about the need for back scenes and the value of proscenium arches, but the Cadeby layout actually works very well without either, especially now it is on display in my studio, where the walls are painted sky blue for a reason.

What I'm definitely thinking about changing is the surface material. I had two layers of foamboard in mind originally, which worked really well on the  Apa Valley (remember that?) micro and I have a large box of it taking up space in the studio. I will still make use of it, but I'm beginning to think it would be sensible to use something else for the trackbed at least, like balsa foam.

With the end of lockdown in sight, I do find myself considering Grundy's Yard as a possible exhibition layout. That is very unlike me. It is actually behind my thinking about making it as foolproof as possible. It isn't intended to be compared to the seminal Outwell Basin Wisbech & Upwell layout, but as a simple example of a layout anyone could build, and find space for, whilst raising standards without going full-on finescale. 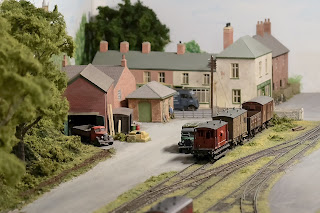