There is a point in building most of my layouts where I despair. Flemish Quay has hit that point. Fortunately, having been here so many times before, I know to press on. 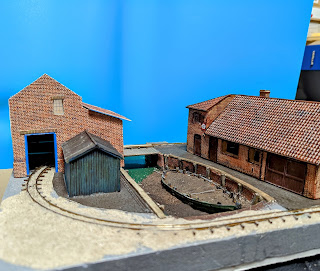 I'm at the stage where the landscape is blocked out and the buildings are half-finished, and it all looks a mess, not least because it looks like a lot of separate things, randomly assembled. 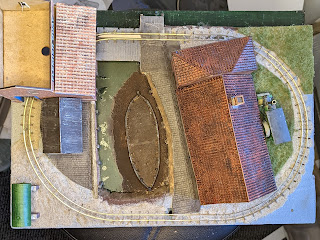 I'm dependent now on two things. One is the scenic elements missing from the photos, particularly the walls, fencing and vegetation, as well as the chain bridge itself. The other is the lack of a unifying and blended palette of colours. Particularly glaring arethe ballast, which will become a dark brown gray, the coping stones on the harbour wall, and the "water" which will be an olive brown colour. I have also been quite cruel to the layout by taking these photos with the help of a ring light. That is deliberate, because it really highlights discrepencies.