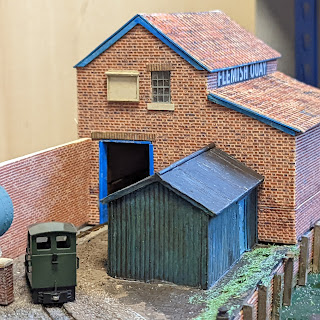 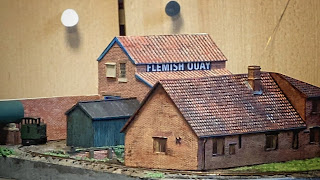 Along with the forge Flemish Quay has been built around the ubiquitous Petite Properties Harper's Yard. At the same time it has also been my intention to try and disguise that fact as much as possible, simply because it IS so ubiquitous that it has become a cliche. In building it I've also had one of my favourite warehouses from Purflet Quay in mind.

I did consider building it as a mirror image, but it works better as a scenic block built as intended. The major changes I have made are adding extra height to the ground-floor. Unfortunatly I had to do that quite late in the day, after my plan A failed and I'd already used expensive Redutex brickwork that I didn't want to waste. That has left me with a join to hide, but I have ideas for disguising it. I've also blanked off some doors and windows, which in any case wouldn't have made sense in the location on the quay. The AnyScale resin shed plonked in front of it also keeps the train out of view for just that little bit longer.

It is very much still a WIP and there are lots of things I will change. For instance using the precut parts with the thicker brick material looks a little odd. I'm also biting the bullet and investing in Modelu guttering and downpipes. I also need to consider weathering, which is such a feature of the building in Kings Lynn.

Looking at the photos you'll see I'm beginning to slowly add more groundwork. Evident in the top photo is the new to me Tamyia Grass Texture diorama "paint". I haven't made my mind up about this  yet, or their "mud". It doesn't help that they are both very expensive products.I'm also continuing to slowly work up the forge to resemble the real thing.

In the great ledger of modelling this is proving to be a useful learning exercise. I'm glad now I've done this before moving on to Grundy's Yard, which I now feel a lot more confident about.
Posted by James Finister at 02:31