I've been dreading adding the water to Flemish Quay. Over the years I've tried most of the common techniques and never been happy with the results.

After an experiment on behalf of one of my nephews in producing 2mm scale fish - a task successfully accomplished using the foil from packets of blood-pressure tablets - I found myself with a spare bottle of Deluxe Materials Aqua Magic.  It is seriously expensive stuff, but rather than waste it, I thought I would use it on this project. I was also quite impressed with a demo I'd seen using the Woodland Scenics Aqua Tints - again not cheap but I thought I might as well experiment.

So how did it go?

Well, my first two attempts were a bit of a failure.

They looked good when first poured, and using Frog Tape I didn't get as much leakage as expected around the baseboard edge. Over time though both pours seemed to dry to a much thinner layer. I suspect there were more gaps between the two layers of foam baseboard than I realised, despite having sealed them first. Much more of a problem was that having looked fine six hours after the first pour when I came back in the studio, next morning, it had pooled in some places and climbed up the walls in others. I think a number of factors were at work, the temperature in the studio, surface tension, and that the channels I was pouring it into were of very different widths.

Yesterday's attempt seems much more successful. Partly because any gap between the foam layers is well and truly sealed, but also because I did it at a much higher temperature. I have a couple of bits to iron out with a final thin layer but it is getting there. Like so much on this project though it has been a useful learning exercise. 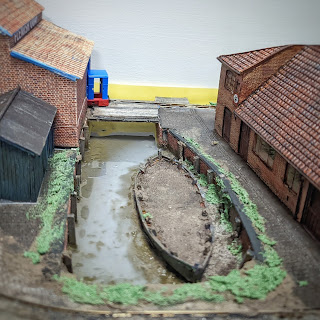