No one is probably more surprised than me that I've made a fair amount of progress against yesterday's to do list.

As always though it isn't that simple, and as I've improved one thing I've become more dissatisfied with others

Giving the goods yard a wash of various tones has improved it considerably, but it still isn't quite right.

The attempt to improve the weighbridge windows 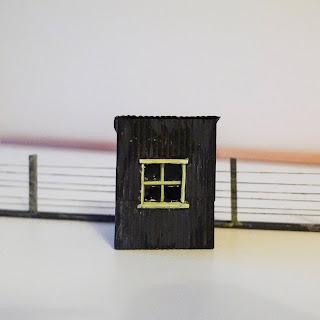 Appears to be no better than my first attempt. 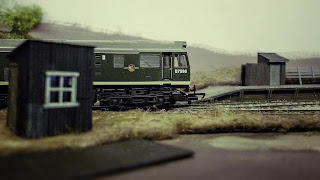 Time to bite the bullet I think and build a new version.

Behind the revised version you can see I've been trying to sort out the lineside fencing as well. Given that I'm having to retrofit it I've opted to build it on a sub-base made form U channel. This was a good move because even then trying to get the "knitting-in elastic" in place was a struggle for my poor eyes. Having said that it worked better than expected. It has just enough tension to remain taut without pulling the posts inwards too  much, and enough give that it doesn't get damaged when you catch it accidentally. Incidentally I've not attached it to any of the intermediate posts, it lies up against them due to the tension. I've still got to add the thin wooden strakes that were used between the concrete posts on the prototype.
Posted by James Finister at 00:42