One of my many excuses for a lack of recent modelling activity is that I've just upgraded the PC in my home office. To be honest as a household we probably have a higher than average number of computers and whilst it is a long time since I had a job that involved getting my hands dirty with technology I can still find my way around the innards of a computer. So normally a new machine is up and running with all the right software and data  in minutes. My home office machine though is a different kettle of fish, with a lot of legacy software on it and a lot of data, especially photographs. So it has taken a couple of weeks to get it to the stage where the new machine is ready to take over.

Whilst trying to find some of the CDs needed for those legacy programs I came across the disks for Microsoft Train Simulator (MSTS). Now I have mixed feelings about train simulators, but I've recently upgraded to the latest versions of Train Simulator/Railworks/Rail Simulator and to Trainz. Trainz just doesn't do it for me, I find it uninvolving, but TS20014 has some quite good content, though it comes at a price unless you buy it during one of their regular promotions.

MSTS is long in the tooth now, and was long abandoned by Microsoft. Out of the box the graphics show their age, especially if you forget you need tom run it in windowed mode to make the best use of modern screens. However it has the advantage that there is a lot of high quality user-generated content out there that can transform it. From my perspective it helps enormously that some of that content is narrow gauge, and I have a particular fondness for the Rye & Camber and W&LLR routes that are available.

Having fired it up again on the new machine I began to wonder what Cambrian Railway content was available. I vaguely remembered there being a payware pack for the Cambrian Coast lines, and discovered to my delight that an expanded version even included the TVR. 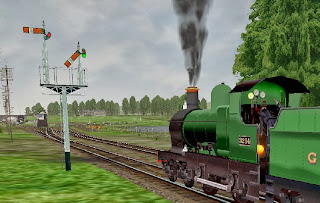 OK, knowing the line quite well now some things are very obviously wrong. The good sheds are far too small and.... but hold on it is what it is, and quite good fun to drive. It has certainly given me another insight into the line. It might not be everybody's cup of tea but I've been really enjoying myself after a hard slog of a week.