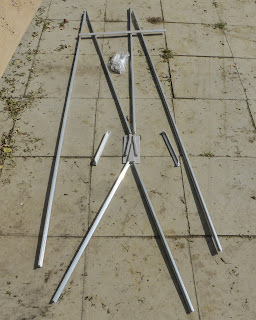 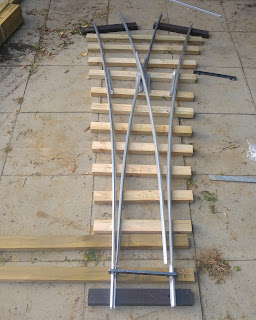 With the slabs lifted it is amazing how much easier it is to visualize options for the next stage of track laying. The equation I'm trying to solve is to run a line into the existing big shed  that will cope with the largest likely visiting loco whilst also continuing the freight only running line through 180 degrees to lead to the other wood shed.

I think I'm beginning to get there. 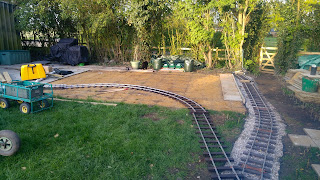 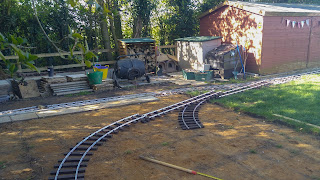 I suspect though I'm going to have to make use of some modelling tricks to provide a visual separation between the lines, to avoid it all looking too busy and to blend in some unattractive aspects.
Posted by James Finister at 11:37 No comments:

The ELR Turns A Corner

Well not really. This is an illusion of progress. 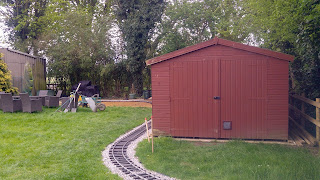 OK it was optimistic of me to suggest the ELR might have doubled in length by now, but for once it isn't my procrastination to blame. The main villain has been the weather. It came close to forcing the abandonment of the first bulk delivery of ballast, and digging out a trackbed by yourself in the driving rain is not fun.

On top of which I have been re-working the plan a little based on trading off different compromises, for an end result that I hope will be a lot better than if I'd just ploughed on.

But on Sunday the lack of an extension towards the drive led to a loss of both slate traffic and that most quintessential of minimal railway cargoes...manure.

So obviously it was time to start work on the planned extensions, And obviously I've started with the other end of the line.

My bank holiday was spent lifting the foundations of the old kennels and relaying the slabs for what will eventually become the station at the end of the passenger carrying section, and the stock shed area. 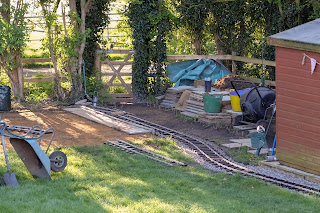 Posted by James Finister at 10:49 No comments: