As if by Magic

Almost as soon as I'd posted the last post I thought that I might as well quickly put some mock ups in place of the structures I'm intending to use to see if they will fit.


The answer I think is just about. 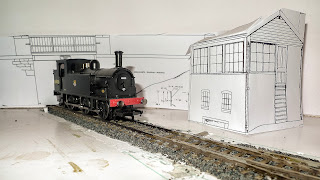 In fact I quite like that the signal box is quite deep. That terrible Hornby J83 is, by the way, terribly tall and probably not the best loco to use in these shots. The quicker I find myself a suitable ex GWR loco the better.

Also rather larger than I would like are those Tillig fishplates. And unnecessary as well since the track is bonded below the baseboard. Tomorrow's job is to finish painting the track which might disguise them a little better.

Posted by James Finister at 16:08 No comments:

Part of the concept of the layout I've not mentioned is that it is designed to sit across the edge of the desk in my home office. This will constrain the normal viewing angle and therefore disguise that it is a "bitsa station" design - a term that I think was coined by Iain Rice. That, in any case, is the theory.

Here is a shot of it in place from my office chair: 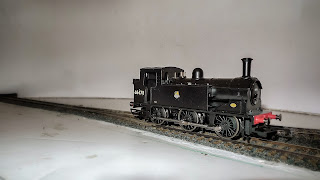 Where the track currently disappears behind the backscene is where the overbridge will go, modeled in relief but with no depth behind it. The goods shed that provides the visual break on the right hand side will sit just out of the frame of the picture.

I'm beginning to wonder about whether the signal box will fit visually. It isn't that big a structure in itself and I was hoping it would disguise what happens to the non-existent road once it passed over the roadbridge .

Also in the interests of  maintaining some vestigial sense of space  I think the station building is going to have to be represented by just the small shelter from Blodwell, which by this period had  the open front closed off with yet more corrugated iron. In fact I can't make out from any of the photos I have whether it even had an access door by this stage.

The internet is littered with blogs that die a sudden and unexpected death. Not a few of those relate to still born modeling projects. If I had any regular followers they could be forgiven that that is what has happened to this.

Having completed the electrics I was about to start ballasting when I took a second look and decided I wasn't happy with the wiring. It wasn't very tidy either above or below the baseboard and I was worried that if I went ahead and ballasted I would only be covering up problems that would come back to haunt me. That is if I could cover them up -  I suspect that ballasting wouldn't have disguised the above baseboard wires.

So I spent most of Xmas mulling it over and decided to re-wire from scratch using  0.45mm wire for the dropwires from the rails. Trying to do this retrospectively made it a little harder than it should have done but in the end doing it right took seconds. I've even put in the DPDT switch based mechanism for the point and  it is working OK although I'll need to reinforce the collar around the wire to the tiebar at some point. 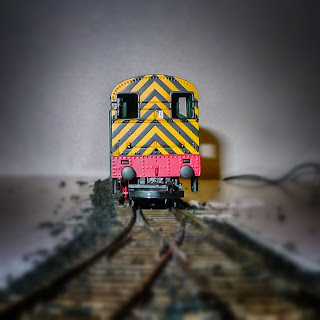 So this afternoon I finally got to run a loco backwards and forwards at acceptably slow speed. My problem on the loco front remains that my two DCC equipped locos are the most basic Hornby 0-6-0s but now I know things work there is an incentive to invest in something more suitable. A 14xx would probably be the best option for now.

More excitingly it means I'm free to start work on the scenics. The overbridge and the overgrown platform are the first two items on the list. That is once ballasting is complete.
Posted by James Finister at 09:11 No comments: