Rails Round The Rectory

I'm one of those odd people who doesn't see indoor modelling as a Winter activity, but one for the Summer nights. So with the clocks changing and a long weekend I've made another effort to restart progress on the Cadeby inspired micro layout.

I'm a big fan of both the Petite Properties kits and the Redutex self-adhesive textures sheets. In fact, I've had some of both in store for a long time so I decided it was time to actually do some modelling. 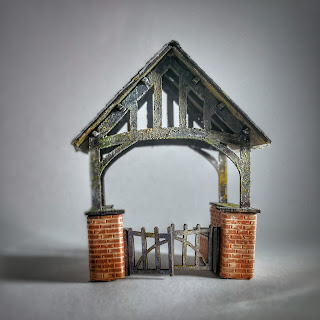 I still haven't got the hang of getting the quite thick Redutex to go round corners. I've also been experimenting with a combination of "watercolour pens" from Arteza and gouache colours to build up texture.

Talking of texture, having finally got hold of a Gorden Gravett's book on modelling broadleaf leaves I thought I would have another go at trees, since they were a big feature of the garden at Cadeby. This was really nothing more than a 3D doodle, made from twisted wire, acrylic gesso, and artificial hair. Still a work in progress, but it is amazing how many deficiencies a photo reveals. 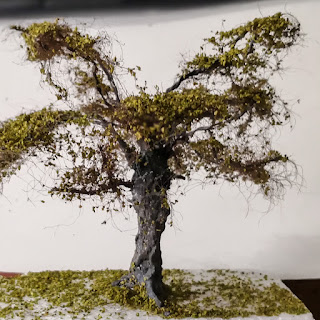 Having said which I still think it is better than my attempt at a tree on Apa Valley using a commercial armature and rubberised horsehair., despite the best efforts of my workshop assistant to get in the way. 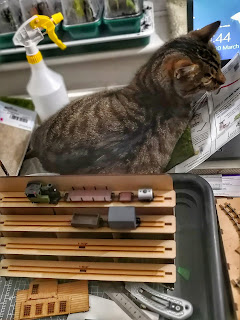 Incidentally, that is a Tim Horn display stand on view, the start of the shed containing Teddy's 4mm layout and a corner of the baseboard.

A story for another day is about how I very nearly made a very silly mistake with the wiring....
Posted by James Finister at 08:27 No comments: 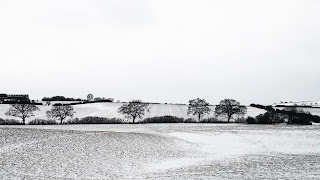 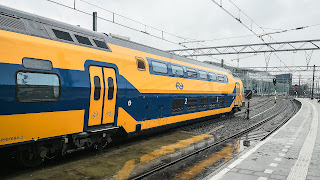