Looking out the window it is a typical False Spring day. The sun is shining but the warmth in it is superficial. Signs of true Spring are beginning to appear, but the year but I suspect bad weather is still to come.

Still it is a good time to give the office/workshop/studio a bit of a clearout. Or at least to attempt to do so.

It is always a mess at this time of year. Stuff seems to accumulate in it over Xmas and as Issy has a new year clearout from the cottage. The construction of Flemish Quay has also taken up a lot of space. A catch with micros is you can't use the baseboard itself as a workbench, and you also end up working on the different elements - track, scenery, building construction and so on - at the same time, because of the level of integration between them.

It is fair to say my workbench was becoming a mess...

Well, being me, I started by having a clearout on the office side of things.This was well overdue and hadn't been done since we built this office and just put everything even vaguely office-related into it. That included stuff that had moved with us several times without being looked at, such as manuals for long gone bikes, TVs and computers. I did keep those that I thought might have longer-term value, such as my Psion manuals from my coding days. other than that though I've been ruthless, and once again came close to needing a new shredder. The ruthlessness extended to a few things of sentimental value as well.

That at least gave me some floor space to start to address the workshop side. It should be noted at this point that anything related to the photography studio aspect is sacred and not to be touched - at least not unless I make a big decision and investment that I'm considering of the less is more but also a heck of a lot more expensive variety.

The obvious problem with the workshop is I have too many projects up here that belong in tin shed limbo. Whilst the Cadeby mico is out on display I'm not going to be doing anything with the vast bulk of my OO9 stock and projects just yet. I do have a couple of ideas in mind. so off they go to the tin shed.

Something else taking up space are my experiments in 4mm couplings. Now I've settled on Kadees there is no point keeping them up here. They might come in useful if I ever build TAoC in EM, but I strongly suspect that it will either be in OO or 7mm. I'm keeping the 7/8ths projects up here for now, although once completed they will move to the tins sheds to be close to the year to be built line.

So what is left hogging up space? There are the magazines I consider too valuable to put in the sheds, my stash of scenic materials, and tons of tools and paints. I can't do much with the magazines but I do need to find a better way of storing the tools and things. the small ones are fine, it is anything over about 6" long that I find difficult to store in a way that is both accessible and out of the way when not needed. Pegboard might be the answer, but I can't work out where to put it.

Beyond that, the time has come to say goodbye to many of my cupboards that could, at best, be described as Heritage Stock.

Posted by James Finister at 08:45 No comments:

Ways with a Cliché

This kit will be familiar to many of you. It turns up on just about every layout built in the last few years that features a harbour.

I've been trying very hard to resist it, because it is such a cliche. Like most modelling cliches it is a victim of its own success. It is a nice little kit of an attractive prototype that isn't readily available in other forms. You see it on one layout and think "Yep, that will work for me"

My basic test for a modelling cliche is you look at a layout and think "Oh, that is the (Name of model and manufacturer)"  The moment you recognise the model, the sense of illusion goes, at least for me.

Which is fine, you can avoid them, until the cliche actually turns out to be just what you need because it matches a prototype.

That is the case here. There are several photos of Fenland rivers that feature boats with a distinct resemblance to this one.

So what to do with it, to make the origin less obvious? Well first of all there is some extra detail to add, it is missing the ribs that are a vital part of the construction. I'm hoping I can use microstrip to replicate them. I can leave out the anachronistic sailing rig as well, though I might one day build one with a more modern one. On the Welland this would have been rowed, or perhaps converted to an inboard engine. But if rowed it would have used removable rowlocks, not the primitive arrangement portrayed by the kit. Finally, the coaming around the helmsmen's position can probably go. Combine that with a painted hull and I hope the base model won't be too obvious. 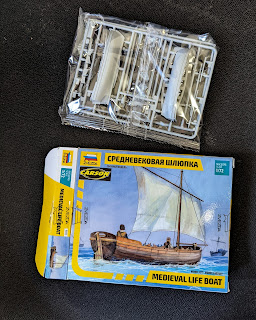