Ireland always draws me back, even when it means stupid amounts of miles up stupid hills in the stupid rain.

This year the lovely folk at Cycling Safaris came up with a new trip to The Secret West.

The downside, you might have guessed, is that it involved stupid amounts of miles up stupid hills in the stupid rain.

As a group cycling holiday it also made it difficult to go off-piste to explore the C&L as much as I would have liked. For instance travelling by train with heavy luggage meant I missed Nancy in steam at Dromod on the train from and to Dublin. And I also forgot to check the links I had to historic maps showing the route of the line, meaning on at least one occasion I cycled along it for a few miles without realising. Anyway here are a few photos.

Posted by James Finister at 12:43 No comments:

Having fitted three holidays into a brief period this Summer I have a backlog of posts to publish, though given the lack of railways on the island the Crete one will be brief.

Railway construction across the gauges has obviously suffered as well. I'm hoping it is a case of going backwards to go forwards. It certainly is on the ELR. Major works in the garden have necessitated lifting 10m of track, but enabled the prospect of relaying another 20m on a better alignment and simplifying the laying of the next additional 20m. At the moment it looks terrible thanks to the deprivations of JCBs, goats and chickens.

The OO9 micro layout is pretty much done, other than additional layering of scenic details, and completing some more rolling stock kits for eventual use on a larger version.

A drainage issue has delayed the building of the home office, but I am at least beginning to be able to think about the four or five layouts I'm hoping it will eventually home. A canal trip to the area has reinvigorated my enthusiasm for the next EM gauge iteration of the TVR. What I'm still not sure about is whether I'll also build a TAoC OO gauge layout, or if I'll combine the two concepts to produce an EM gauge, TVR inspired layout but using TAoC trackplan. Of course I could always build TAoC in N gauge...

What will definitely be built is a small OO gauge dock/canal side micro layout, and the slightly enlarged OO9 layout.

On the back burner is a small tramway layout with a Kinver theme, and various 16mm and 7/8ths micro-layouts that will essentially be for photographic purposes.

Ah yes, 7/8ths. I'm still struggling with a site for the planned 7/8ths garden line whilst being seduced by more and more stock. The conclusion I've come to is the ideal site for it doesn't exist yet and won't until the garden redesign is complete, especially the construction of a duck pond.

But in the meantime let me return to the eponymous subject of the title of this blog. Peter Jones, Tom Cooper and Brian Clarke were my mentors as a teenage builder of garden railways at a time when, to be frank, I found many in the 16mm Assoc to be snobbishly middle class.

The three of them were unstinting in their support and encouragement.  So it felt an obvious choice to name my Accucraft Wren after Peter, and Matt Acton did a brilliant paint job on it. The stars aligned and Peter's daughter, Kes, the doyen of the Tallylln Railway shop, performed the naming ceremony on it at the 70th anniversary celebrations of the Compton Down Railway.

But I thought it would be nice to put Peter himself on the footplate of a class of loco he held in particular affection, and who better to do that than Rob Bennett?

So here it is, a collaborative effort in many many ways to which I've so far contributed pretty much nothing. 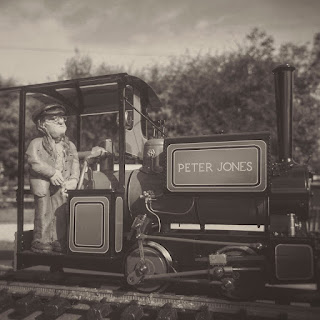 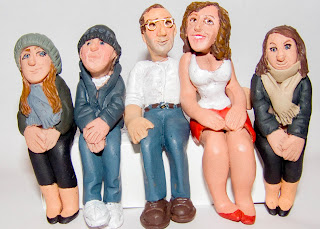 Posted by James Finister at 03:29 No comments: