The First Year of the ELR

I find it quite hard to believe that it is only a year since construction of the ELR began . In that time it has become established as an invaluable aid to country living, Coal, wood, and rubbish provide regular traffic, and the first sections of track to be laid now low look like they have always been there. Rather too much so in some cases. 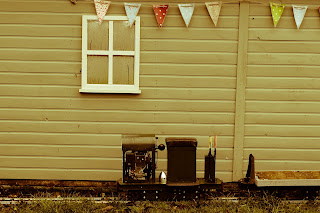 Having said which, there is the small matter that the line is still some 30 metres shorter, end to end, than I'd hoped it would be by now. That in turn means two of the key locations the line was built to serve still remain rail-less, so said coal, wood and refuse services still involve some road rail transshipment.

Actually 10 of those 30 metres are laid, but only on a temporary alignment that I'm not yet happy with. And the other 20m of track has been laid, more or less, but as sidings, not mainline. that is because I altered the order of construction. In theory it shouldn't take too much work over Spring and Summer to make a lot of progress to finish this stage of construction.

The saga of the sidings has been covered on previous blogs. It has taken me a while to adjust to the lead times needed to obtain 7 1/4" gauge point work, . As you will have gathered from those posts I'm both very happy with the products from MRSC and surprised by how much easier building points in this gauge is compared to building them in EM gauge. The tyhird and final turnout of Phase 1 is under construction at the moment.

Teddy has continued to do stalwart work, with just a few minor snags needing  to be ironed out. I'm still flummoxed by the disappearing letters from from the pseudo Lister ballast weights but I'll replace those a t some point. Hopefully I'll also treat him to a more sophisticated paint scheme one day. It would be nice to supplement him with a second loco over the next eighteen months, but we'll have to see.

I've also been very pleased with the wagons built on Colin Edmondson's buolt together chassis. I really need a few more though, since they are proving so darn useful.

Sadly cashflow* means I've twice missed out on suitable coaches so passenger traffic is still restricted to the solitary man-rider. We will have to see what 2017 brings on that front. It isn't  a major issue at the moment.

There is no doubt that the ELR has been responsible for an almost total lack of progress on indoor modelling. Again I'm quite relaxed about that, but it really is time I made an effort to complete the OO9 Cadeby micro layout. I suspect all that needs at the moment is for my beloved to go away for a weekend so I can make a certain amount of mess.


*On the other hand we did have a rather wonderful holiday in India.