Another weekend of sorting through sheds has added to the pile of boxes at the railway end of the studio. 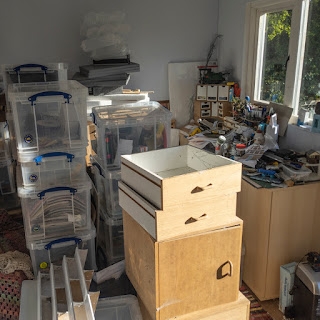 It isn't as bad as it looks. At least that is what I tell myself.

For a start, this is the contents of both my old modelling rooms, both packed in a hurry and without regard to how much space I was taking up. I'm hoping there isn't too much duplication between them apart from paints and chemicals. I'm also expecting most of those paints and chemicals to be unusable by now.

Any organisation there is amongst the boxes is based on projects and stages of layout construction. So once I've re-organised them a lot of boxes will be going back into one of the sheds. That is presuming I've got around to tidying up the sheds themselves. the wooden one isn't looking too bad, but the big metal shed needs a real effort. Not only that, but the metal shed also needs to be readied for storing more 7 1/4" stock away from the goats.

As well as the boxes there are a lot of baseboards and materials that need to be packed away or used. At the moment I want to focus on the Casket Yard inglenook

I still haven't finalised the layout of the studio. The missing element is the workbench that I need to shoehorn in somehow. Then I can start to play around with locations for cupboards, shelving, and baseboard supports. a workbench will also let me resume work on the 7/8ths and residual 16mm kits that by their nature take up a lot of room.


It might not look like it, but I feel I'm beginning to make progress working on the site for the relocated vegetable plot and 7/8ths line. I'm a long way from having a plan for the 7/8ths in mind, though the manually controlled Wren more or less dictates a disguised continuous run of some sort.

Posted by James Finister at 01:37 No comments:

Easter here is always busy, whether it is hosting visitors or sorting out the garden. There are no prizes for guessing what it was this year. As for the source of my aches, well...

The ELR has always been a practical and purposeful line. From the days when it was, literally, a pointless 30m long it linked the house to the domestic and garden service area next to Quick Lane. The location of the terminus was a bit of a compromise.  Whilst it was quite close to the storage area it also had to allow for paved access to the big metal shed and the back gate that allowed access for dog walking. Despite that, I always thought it had a certain charm, especially in photographs. 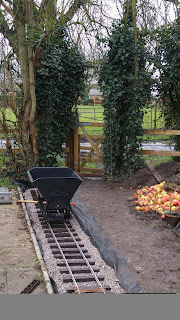 As time went by the service yard got hidden behind a willow wicker fence to protect it from prying eyes. The extended running line allowed direct access to the metal shed and also to the main vegetable plot with the original terminus turning into a siding served by an awkwardly placed turnout. The wicker fencing meant it was as easy to serve the storage area by shunting wagons on the main line as it was to use the siding.


And then along came the goats, who trashed the wicker fence, the storage area, and the vegetable plots. 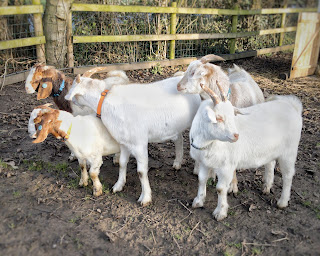 So the Easter weekend was devoted to demolishing most of the service yard and moving the vegetable beds. Last year's Sycamore cull has opened up an area for a new service yard, closer to the house. That means trains won't need to run so often, with more of a focus on the sporadic bulk movements when deliveries arrive than regular weekly workings. In an attempt to thwart the goats the kitchen garden is now as far away from the kitchen as it could be, next to my studio. Or rather it will be when I finish rebuilding it. The good news is that not only will the new plot be bigger but planning on-site suggests I should be able to fit in the 7/8ths line out of sight behind it.

It is, though, 100m from the furthest reach of the ELR. 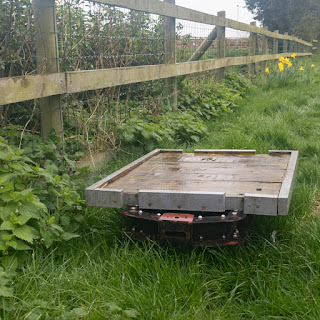 Posted by James Finister at 03:21 No comments:

Well, I suppose it depends on what you mean by productive.

I did manage to get a little more sorting-out done in the office, including finding some old photos I'd forgotten about.


Over the weekend I apparently walked over twenty-fives miles in the course of gardening. 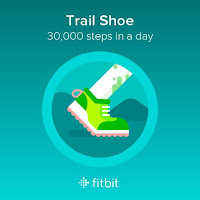 I really should build the extension to the ELR. Where that extension goes is intimately connected to the decision about where to put the garden pond goes. Fortunately, I'm finding the location of the studio ideal for getting a different perspective on the garden, though it does look like I'm going to have to sacrifice the croquet lawn.

The pond is a long term plan, and if I get my act together  it will also be integrated with the 'proper' 7/8ths line. In the meantime some re-jigging of the new, and now hopefully goat and chicken proof, vegetable patch has freed up space for a short term 7/8ths  project. What form that will take I'm not sure. I suspect the Wren really needs a continuous run and I can just about fit one in. That then raises questions of access to the whole length of the line, which in turn might mean building it at a lower height than is ideal.

At the back of the sheds I've also found rather more 16mm scale stock and track than I realized I still owned. The jury is definitely out on what to do with it all. Most of it seems to date from my last line which, you might recall, was in a very small garden. So perhaps I could find space to squeeze something in, with a focus on battery operation. Looking through this blog that last 16mm line is conspicuous by its absence, which is odd. It went through a number of incarnations, each squeezed into less space in the desperate hope that it would survive life with three teenagers and two dogs.

As for actual modelling this weekend...

... I've managed to get my Tim Horn EM stock display stand back into a semi usable state. It really suffered from a combination of mice and damp whilst in storage. We solved the mouse problem by housing rescued feral cats, but they caused problems of their own. Whilst it isn't as good as new it has provided a useful trial run for seeing if I can restore the baseboards for future use.

I've also been playing around with some Scalescenes kits ready to embark on my modified dockside boxfile layout. Whilst rummaging through boxes I discovered my old Peco locolift, so at least it will have a fiddleyard of sorts. Looking at the Scalescenes kits has made me think aboutTAoC. I was going to user lasercut buildings that equated as closely as possible to the structures suggested by Roy. But perhaps it is equally valid to use card models from a single source, in the way he chose models from the Prototypes range. With that in mind I've already got ideas for a station building and bridge, roughly based on Steens Bridge. The question then is what to do about a goods shed.

Posted by James Finister at 04:09 No comments: