A few years ago I got given a small bottle of port in a wooden display case. It was around the time the Oxford Diecast IoMR loco came out, and I kept the box to build a static diorama as a memory of all the time I spent over there working for their government. hat in itself is a long story for another day. Needless to say the diorama never got built, partly because I lost the loco in the house move.

Now James has built my Ruston Proctor I decided the box would make a nice setting for it, but would also let me try out some scenic ideas ahead of Grundy's Yard, especially around modelling water, which has always been a challenge for me. 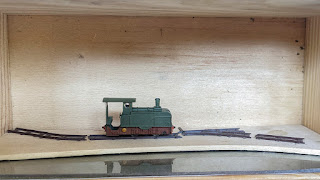 A failed project by my wife means I have a lifetime's supply of perspex, and it has made life a lot easier.
The photo, showing all 22cm of display area, also reveals the loco now has a chassis. As always I find it fascinating to watch these HOf/OO6.5 locos at work even though the low voltage controller is single speed. Why I think it works is that the magnet adhesion, Magnadhesion to those of my age, compensates for the scaling of physics and reduces the small scale "wobble"

I'm still contemplating whether to use this or to make the display operable. I have some scenic ideas in mind. To the left the railway will appear from under a bridge, and to the right will enter an industrial building borrowed from the canal boxfile. I'm still wondering about the backscene and whether to include trees.

Posted by James Finister at 04:01 No comments:

I've always liked 18" gauge railways. I think it must go back to seeing pictures of the ex-Woolwich stock when it was at Bicton. I've always had a soft spot for the early internal combustion locos as well. So when Narrow Planet introduced a 006.5 kit for the Ruston Proctor it went on to my wish list. It would probably have stayed there if James Hilton hadn't mentioned that he had a slot available if I wanted a built and finished one.
Those of you who follow his blog will have already seen the result. 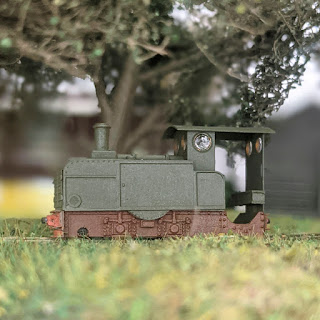 It is posed here on my 009 layout, so it would be off the rails, if it was actually sat on the right chassis. That is in a box somewhere. 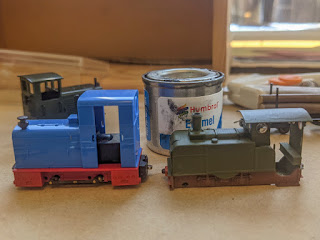 This picture is an attempt to give an idea of scale. That blue loco is actually a HOf one. Having a thing for the Ruston Proctor I have some other supposedly "4mm" prints from Shapeways lying around. They are massive in comparison.

So what am I going to do with it? It was originally intended for the Scalescenes canalside boxfile layout. I'm still playing around with ideas for this. I don't want the railway to overpower the scene, and I want it to look integral to the site. In the meantime, I have a display box that originally contained a miniature bottle of port that I think would suit a static diorama.
Posted by James Finister at 01:42 2 comments:

A Bank Holiday in Skeggie

I spent a lot of my childhood in Blackpool. For a few years, my parents ran a pram and toy shop in Cleveleys. My first school was Norbreck Infants, and even after we moved to Birmingham all my school holidays were spent in Blackpool with my Gran.

I think I saw Blackpool at its best. Most generations probably think that.

The tram fleet was still diverse, and not yet worked to death, and new developments were still happening. The illuminations were truly magical and reflected the space age when anything was possible.  Every Summer season a new celebrity would live in the bungalow at the end of our avenue, and at the other end was a tram stop. The circus and the Tower were magical, the Pleasure Beach and the Golden Mile still felt like old-time fairgrounds, and the trawler skippers still had cash burning in their pockets. There were even steam trains to be griced, at least for a few years.

I go back occasionally. It is a long time since I last went for pleasure, but work has sometimes taken me there. The last visit was ghastly. I was running a training event at the Norbreck Castle and it was dreadful in every respect. We walked into one pub and because we were a team and relatively smartly dressed for Blackpool they thought we were the bailiffs.

The one bright spot was my fellow lecturer had been heavily involved in the broad gauge project at Didcot.

Anyway, despite that, I will still defend Blackpool to the death as the best British seaside resort.

But we do like Skeggie.  We love Sunny Hunny, I crave Cromer, but Skeggie is the family choice for a day out.

So that is where we went on Sunday.

A quick aside. The last time we visited was back in September, I think, during one of the partial relaxations of lockdown. Everyone was very sensible. This time, despite being fully vaccinated and not going inside anywhere I still felt a lot less comfortable. To be fair, families on the beach were being very good at social distancing. Elsewhere though the 2m rule and masks had clearly been abandoned.

It was lovely to see that the town has made use of recent funding to make it more attractive, and it shows. I'm looking forward to the pier refurbishments as well, now it has changed hands.

One of the major changes has been the entrance to the car park that now takes cars away from a pedestrian area. 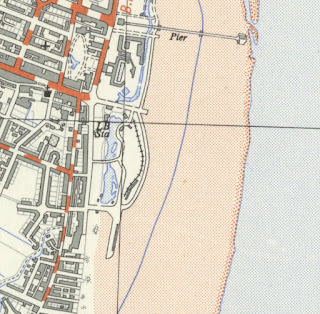 Now the interesting thing about the car park is the seaward boundary of it it was the route of one of the three* incarnations of the Skegness Minature Railway. Visitors today will note that since that map was made the pier has been truncated and more land has been claimed from the sea.

I believe the later versions of the line ran on the other side of the lake. I'm sure I knew that once, but can't now find the evidence. This is an oddly neglected bit of the resort.  An old miniature golf course is left abandoned. 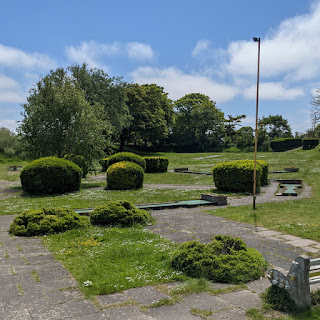 And the much loved Fairy Dell paddling pool is unopened 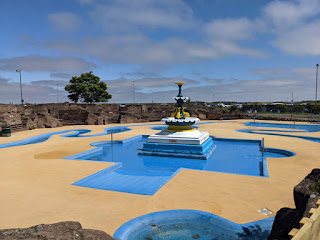 There is also this superb, Emettesque kiosk 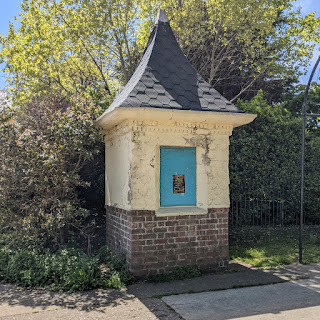 Perhaps what is needed is a new miniature railway? Perhaps if the Wells Harbour line is forced to close this would make a good new home for it?


Anyway, to close on a  positive note, it was great to see some steam in action for the first time in over a year. 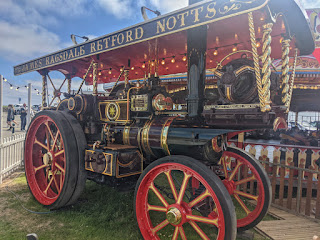 Posted by James Finister at 02:38 No comments: