You don't need me to tell you how difficult things are at the moment. Actually, I was on a call with colleagues from Australia this morning and they seemed to think it was a miracle anyone was left alive in the UK. My mother in law gave us a fright by ending up being treated on a Covid ward on NewYear's Eve, but thankfully appears to be recovering. An outbreak of bird flu in the UK also led to the urgent need to get the chickens into a covered enclosure. Amongst it all, I seem to be keeping busy. I've worked seven of the last eight weekends and Xmas day itself was the only Bank Holiday I managed to have off.

The 7/8ths test track is slowly bedding in, though it won't be until Spring that I'll be able to level it for the Summer. It is seen here with a tinplate tram on it, a late Xmas present from the step-son. Definitely more 16mm than 7/8ths, but perhaps with some potential to run on the vegetable patch line when I get round to sorting that out. 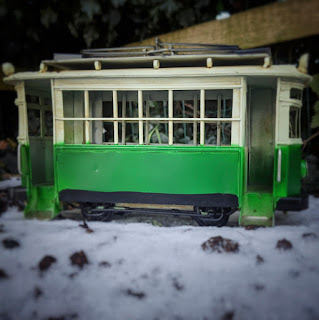 Talking of which, here is a much younger version of my stepson, sculpted by Rob Bennett, sat waiting for a train on the test piece I built for the vegetable plot project. It is stood up to the winter quite well so far. And yes, I do trim the grass with a pair of scissors. Both photos show the obtrusive ranch fencing. It disappears in the vegetation during the Summer, but I'm going to have to think of some way of disguising it at this time of year. 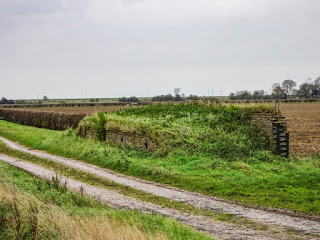 This is one of two surviving loading banks on the Lawyers Farm railway, near Holbeach St Matthews. It is relatively easy to trace the route of this one.

Next is the Lighthouse Farm tramway. This is an odd one. It is on the mouth of the River Nene and served a farm built on land reclaimed in 1910 and 1917 as successive sea walls were built. Another wall built, I believe, during the war means it now sits still further back from the sea. The mystery is the only route map I've ever seen of it, in the Oakwood Press book, doesn't make much sense compared to the layout of the fields it ran through. This is actually a photo looking back towards the 1917 sea wall from the current one, so the tramway would have run from right to left behind the lighthouse. You can't actually see where it would have run from here, but the lighthouse is of interest in its own right. One of a matching pair designed by Sir John Rennie to guide shipping in from the Wash I'm standing on what was once pretty much the seashore. It is famed as the pre-war home of Sir Peter Scott, and it was here that he underwent the conversion from wildfowler to conservationist. It is also currently for sale if anyone is interested. 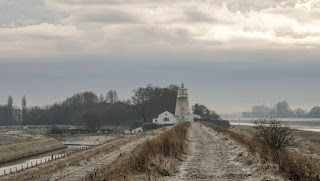 What of other on going projects? Priorities are some 7/8ths rolling stock that just needs a little work and space to finish off, a RC ship to be built once I get the RC gear, and a single baseboard OO shunting layout based on a mix of Kings Lyn  and Great Yarmouth

There are, needless to say, many other projects lying around the studio including TAoC baseboards. Roy Link's recent sad death does make me think I should return to that, and I'm still gathering bits and pieces for it.
Posted by James Finister at 06:13 No comments: