So late last night I finally plucked up courage to put in the "proper" backscene.

For an off the shelf commercial product I think it fits quite well with the layout. I messed up the clearance for the lid, which means it is best not viewed from low angles, and as the photos show I need to roller over it again to get rid of a couple of ripples that emerged as I bent it to fit. Overall though I'm pleased with the result. It looks better in the flesh than in the photos. 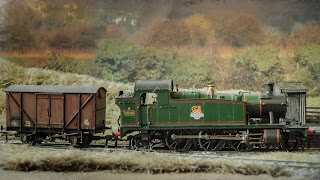 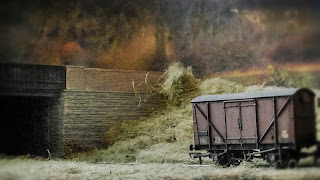 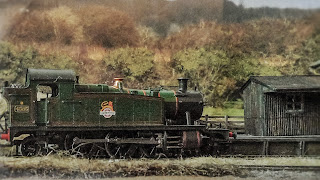 With the backscene in place I can now start adding the real scenic work, starting from the back of the diorama and working to the front.
Posted by James Finister at 03:01 No comments:

I'm slowly building up my nerves to put the photographic backscene in place. Until then I've reverted to a plain white one, and since it doesn't extend to the third side of the box it means I can still get the camera in to take shots like these. 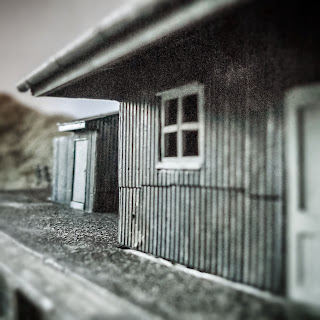 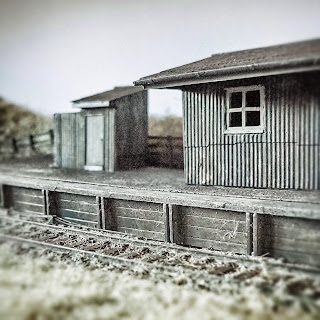 Posted by James Finister at 11:14 No comments:

It seems a long time since I've had  a week that was quiet enough at work to allow for me to be home in the evenings.

I did, however, manage to get something like a lunch hour today. Like as in it was only half an hour and I didn't get a chance to eat lunch, but since I was working from home I did  get a couple of jobs done on the layout. 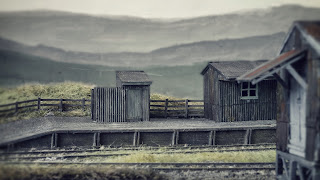 So the platform is now surfaced and the goods yard is ...well still not right. I'm struggling with the very simple question of what a muddy goods yard should actually look like. 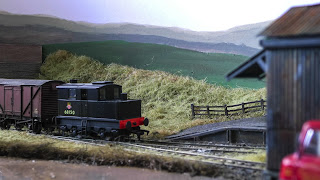 Posted by James Finister at 15:37 No comments:

Plastikote and Rustoleum make products that are really useful to two types of people.

The first are the truly creative crafty type who would use the Plastikote Manhattan Mist  Stone effect aerosol to turn a polystyrene sphere into an attractive table decoration.

Thne there are those of us who use these sorts of products to cover up our mistakes.

This, of course, has got nothing to do with any recent work on the platform and goods yard. Nothing at all. 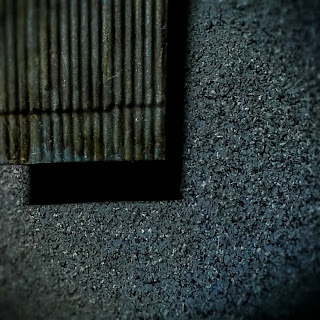 Posted by James Finister at 09:33 No comments:

My first exposure to the Tanat Valley came via John Allison's Porth y Waen O gauge layout, described in the October 1977 Railway Modeller. John was well known for his role in the Warley Model Railway Club, and was much mourned when he  died earlier this year.

My back collection of RMs disappeared in a series of unfortunate events, so I recently got hold of the relevant issue via ebay.

I'd forgotten that a) as far as I can see it didn't mention the Tanat Valley and b) the Layout of the Month was Tony Ross's Lower Hemlock that I rather liked at the time.

As usual looking through a back issue of RM makes you think about how crude things were in those days. I remember the early Jouef Class 40 as being a real landmark in RTR quality, but the photos show just how crude it was. Also striking is the number of traders who are no longer around.  I loved the advert for Modelmania in Norbury "I not only give free advice, I also sell things"

Talking of which I got an email recently from Phil Barlett, whose father bought my father's old model shop in Coventry. As is so often the case this became a small world/6 degrees of Kevin Bacon conversation.
Posted by James Finister at 12:40 No comments: 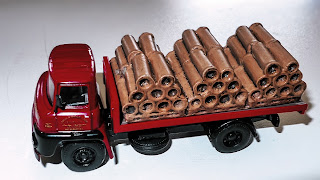 One feature of photos of the line towards the end of its life was the number of pictures of the goods yards that show large numbers of drainage pipes.What I don't know is if this is truly representative or just a coincidence, but I think they are going to have to feature in the next version. Harburn Hobbies do these palletised versions, that might just do the job, at least until I come up with a better solution. The lorry is another Basetoys one. On the plus side the cab is slightly more detailed than the AEC, and it is an example of a Leyland lorry of a type that features in some photos of the goods yards. On the downside the lovely signwriting proclaims that the owners hail from Nr. Halifax and this particular example was clearly assembled on a Friday afternoon.
Posted by James Finister at 15:05 No comments:

Once again progress has become glacial. Largely because I've been out of the country a lot lately, but also because my attempts to sort out the surface of the yard and platform seem to have made things worse, not better.

Whilst I ponder what to do next here is a shot of the station building, revealing just how bad my first attempts at building windows from scratch really are 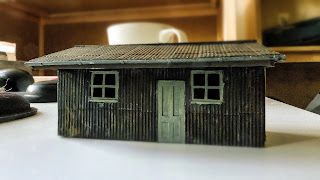 Posted by James Finister at 12:07 No comments: