Time for an update on the layout itself.

By now I'd planned to have the track laid. Three things have delayed it. The first was trying to work out the best way to hack out the ends of the Apa box to allow for connection to the fiddleyards. This would obviously have been a lot easier if I'd done it before constructing the box and if my jigsaw hadn't given up the ghost. In the end it came down to drilling the corners and some violence with a Stanley knife.

Then there was the embarrasment of losing the rail joiners. These eventually turned up after a week of looking taped to a box for safe-keeping - but not before I'd ordered replacements.

The real reason for the delay is the fear factor. I have horrible memories of my childhood n gauge layout never recovering from my attempt to ballast it and I've got the added complication on trying to fit in an operating mechanism for the point.

I really can't justify the cost of the DCC peripherals for a single turnout so I've gone for a mechanical option that should also allow me to switch the supply to the frog. 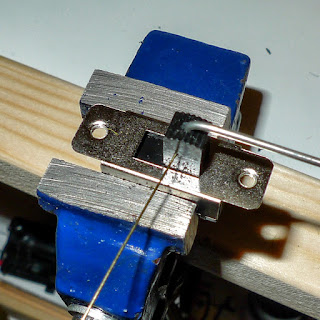 A DPDT switch, because I happened to have one, though a SPDT would do the job, drilled to take an operating rod of unknown origin and a length of .45 wire to engage with the tie bar. This is the first time I've tried this idea and I can't believe it is actually going to work.

So, no more excuses, the next big job will be to get the track down and wired.
Posted by James Finister at 12:15