A quick break from work this evening has let me put the fencing in place, though not permanently yet. 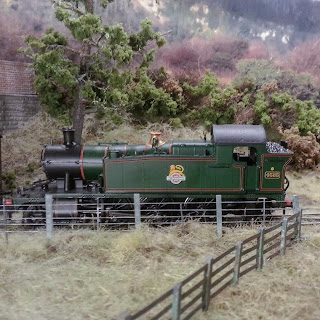 The idea of building it on the U channel has worked better than expected, especially since the channel could then be pre-planted with vegetation.

The intermediate strakes are 0.6mm Plastruct rod. If doing it again I would probably use wire. They are so obvious in photos of the line that they need to be modeled, and that in turn meant I had no real choice about whether or not to model the fence wires, for which I used knitting-in elastic. This is one of the alternatives to stretched sprue that kit modelers use for rigging biplanes. I could imagine using it to represent signal wire as well. In this case I've used Metalcote on it, but to be honest I think it would have been fine in its natural state.

I think it has made a big difference to the diorama 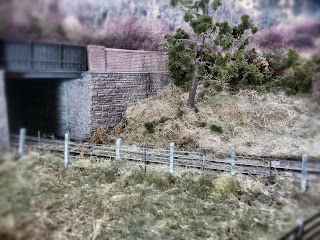