I dread to think how long it is since I last modelled in OO9. Suffice to say it wasn't in the current century, and my eyesight was a little better.

Thankfully, or perhaps not, a camera and decent sunlight makes it a lot easier to see what you have done, if not what you are doing, as these WIP photos show. 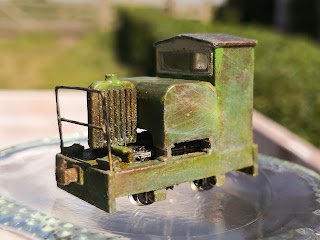 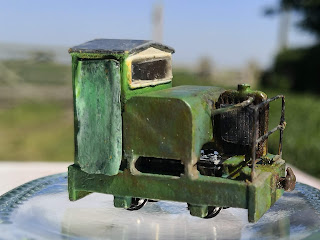 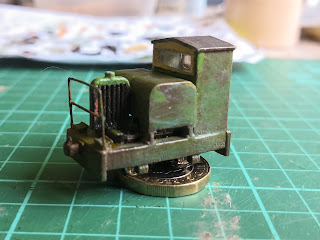 So still quite a bit to do still. As well as quite a bit of retouching I definitely want to replace the front glazing.

There are two things in my defence. The first is that these are horrendously close up shots of a very small model, and the second that the body is a very basic WSF Shapeways print.

That was quite a deliberate choice because I wanted to see if I could use the coarse surface to aid a look of dereliction on what was never meant to be a working loco but parked at the end of a siding mouldering away. It isn't meant as any criticism of the base model.

At that time I hadn't realised just how rough even a more expensive print can sometimes be. In fact, it can vary considerably even when you order two prints at the same time.

I was actually surprised that the flat surface cleaned up quite nicely though with a lot of effort. Where it has caused difficulties is the window frames where the graininess is still very apparent.