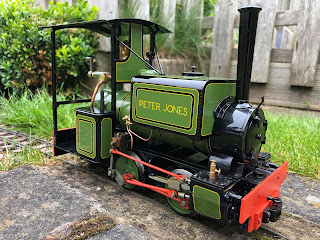 Matt Acton of Berry Hill Works has finished the lining of my Accucraft Wren and I think you'll agree he has done a stunning job.

Many of you will recognise that it is named after the late great Peter Jones of Compton Down fame.
Peter must have inspired many many garden railway modellers over the year.  He encouraged people to have a go, whatever their abilities, and was one of the first to popularise the scenic "modelled" garden railway as opposed to trains running around a lawn or flower bed. He also had a 1:1 model of a Wren in his "greenhouse" so it seemed a particularly apt choice.

Whilst I obviously can't wait to get my hands on it, the Llechfan Garden Railway at Towyn, which has preserved so much of Peter's legacy, is holding a 70th anniversary celebration of the Compton Down, so I'm trying to arrange for the Wren to visit for the day, though sadly without me. I'll be collecting rescue chickens to replace our flock which a fox devastated whilst we were on holiday.

I did harbour plans to snap up one of the last Accucraft Bagnalls, but that plan has been compromised by finally losing patience with my ride on mower and deciding to replace it with something more robust. Oh and goats, my wife has decided we need goats which are arriving next month as well. The Eaugate Light Railway is becoming increasingly agricultural!
Posted by James Finister at 03:44