The last time I made and kept a New Year's resolution the impact on my life was massive. In fact, it indirectly led me to where I am now, sat in the studio at the end our fenland garden

This year I think it is time for another serious set of resolutions around work, home and hobbies.

So my modelling resolutions aren't going to revolve around specific projects, other than not starting a new one* and channelling resources into the refurbishment and extension of the ELR.

The prime aim is going to be moving on some of the projects I've already got on the go, including those that have been on hold since the house move four years ago. That doesn't mean finishing entire projects, but rather about getting some of the sub-projects to a point where they are ready for use when I'm ready to progress the bigger projects.

So I might not get around to building a permanent 7/8ths line in the garden, but I will have the basic stock and structures ready to go. Incidentally, the new perspective that the studio has given me on the garden is proving useful for rethinking how we might use it in the future. Building the studio has also created a new more private enclave in the garden that I think might allow me to build a garden line safe from public view. 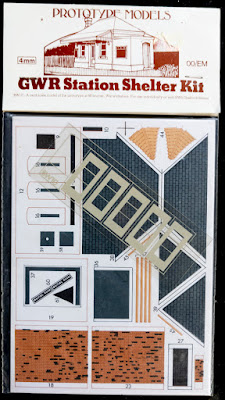 I'm 99% sure I've settled on the 16.5mm gauge version of TAoC, for reasons I'll explore more here as progress resumes. One of my last purchases of 2019 has been a Prototype Models kit for Wimlcote Station which was, of course, a key feature in Roy's original design. I'm not going to actually build it, since the artwork doesn't match modern standards. I'm going to use it as a reference point in deciding whether to go with the LCUT version or another approach. I've already sourced the goods shed.

* This comes down to your definition of new. There are three little projects that I've not started yet but that are on my project plan. The most significant is a 15mm gauge garden line based on a lonely stretch of the C&L
Posted by James Finister at 09:42