I See a Baseboard and I want to paint it Black 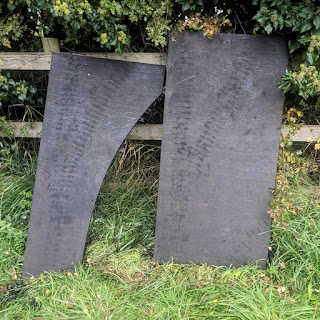 On Friday morning I looked out the window to see that not only had the goats turned the ELR's coach on to its side, but they had already started eating it.

I swore. Very loudly and for a long time, using a very naughty word.

And I felt like giving up. Not just the ELR, but everything.

It was the proverbial last straw.

On at least one level I've decided to scrap the ELR. It is the railways or the goats, and whilst their rescue was yet another "over my dead body"  argument that I lost, and they have left a trail of destruction in their wake, I am very attached to them.

At another level, and perhaps it helps that I'm thinking on more than one level, I'm considering radical alternatives for reconstruction. In pretty much every other aspect of my life this is where fate plays a card and there would be a ridiculous coincidence. If railways were like cats yet another wanted feral would walk into our lives  - currently nine of them, I think. But no such luck so far.

Perhaps it might even force me out to my comfort zone, and into the front garden, where I've been suffering from the 7 1/4" gauge equivalent of empty baseboard syndrome.

One idea I'm exploring in my head involves abandoning the very first section of the line, at least for now, and gaining access to the front garden from the other side of the house. That would significantly reduce the amount of line exposed to the goats and force me to use the back garden section much more as a spur to the engine and stock shed just for use at the beginning and end of the day, rather than as a railway in its own right. It would also give me access to a better alignment in the front garden with less need for earthworks but would add the need for two substantial crossings of the driveway. And Issy would have to move the caravan. We will see.

On the 7/8ths front, I managed to find time to treat the marine ply baseboards. In the long term they will be covered anyway, but using a black tinted preservative seems to help me envisage how the line will fit in. I all still looks dreadfully ugly but I can see where I'm going with it. I need to start thinking about a few simple structures to provide scenic blocks.

It is odd looking forward to Winter with a workshop re-established. I lost so much of last year to the workshop/studio/office move.  I keep looking down at the "railway" end of the studio and pondering the long term 7mm plan. I can't yet free up the space to make a start on the Last Great Project but I'm increasingly wondering why I'm not focussing on 7mm  rather than 4mm. Not that the 4mm projects won't carry on, but I need to build up a feel for 7mm again. 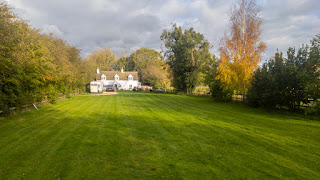