Over on the Micro Layouts Facebook group, Keven Prince reminded us all of a seminal 7mm micro layout: Deryck and Peter Featherstone's 7mm scale Abbey Road and Barton Bendish Light Railway. Designed for a student study bedroom the station area measured a massive 5’6”x 1’4” and appeared in the November 1972 Railway Modeller. Being based on a mix of the Wissington Light Railway and the Wisbech & Upwell it took me a matter of seconds to decide a version of it would be a suitable second board from my planned micro based on White Swan Yard. Playing around on the existing second baseboard from that scheme suggested it would be most sensible to just build it as a mirror image inglenook that could also be operated as a self-contained cameo. Fortunately, I already have most of what I need to build it in stock. In fact, I have a horrible suspicion most of the things that I've ended up buying for it are lying around somewhere in forgotten storage boxes. The only specific purchase has been the Arch Laser GE Goods Office, everything else will come in useful for other projects. Well, apart from couplings. But I'll come back to those in a separate post. My aim is to keep it simple, whereas I know the White Swan board will require a lot of scenic work even in OO and even though it shares the same basic track plan. The one complication is to leave my options open as to whether to operate it from the front or back. And why Grundy's Depot? Well simply because they are the big local farming family and using that name doesn't pin it down to a specific fenland location. 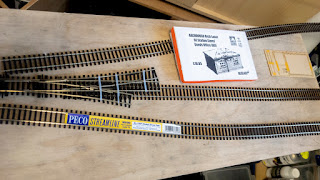