It still seems odd to look out the window in the morning and not to be greeted by a chorus of goats demanding food. The good news is they appear to have settled in well at their new home.

I'm still coming to terms with the reconstruction of the ELR. It really is difficult to know where to begin. I think it will be with the original terminus of the line, next to our back gate. In the last year of operation, this saw very little traffic because we moved the service yard for the house to a new location.

My initial plan is to realign the track and build the running shed here, to house the coach and at least one of the locos, freeing up the workshop. At a later date, I'll build a lean-to against the workshop to store wagons undercover. I'll still need a siding leading up to the gate to move deliveries of ballast, but that is likely to be a temporary track laid down when needed.


As expected I'm slowly being able to move more things from the office down to the workshop. That is making me think about my next plans for the indoor layouts. Finally having a clear space on my big desk has taken me back to the original gestation of the Apa Valley. What is different this time in the space I have in mind is going to be viewable from at least three sides and is more L shaped.

Option one is an OO6.5 layout to just watch the trains go by. I'm thinking something that runs from an industrial setting, out into the marshes, and then back to a harbour.

Option two is a bastard combination of an Ian Holmes inspired idea for a Kings Lynn based layout crossed both with White Lion Yard in Great Yarmouth and an old idea I had for a pointless EM Inglenook.

As with the OO6.5 layout I've not got a detailed scheme in my head yet, but it would involve an off-scene traverser or sector plate, with the tracks entering the scene in such a way that they appeared quite separate.

Option three is simply that pointless EM gauge Inglenook to finally get the Tanat Valley out of my system and make use of the old station buildings.

Then Bachmann had to come along with their double Fairlie announcement.

For years I've had two kinds of slightly absurd OO9 ideas in the back of my mind. One is an extended rabbit warren based on a couple of CJF plans, or, in a simplified form, the original Jopuef preformed HOe layout. The other is based on an old layout that appeared in MRC back in the sixties of Minffordd. It might well have been  built by Chris Leigh, and might even have been in 5.5mm scale

Both of these schemes would involve a certain suspension of belief. Here is my badly drawn concept for the Minfford layout. 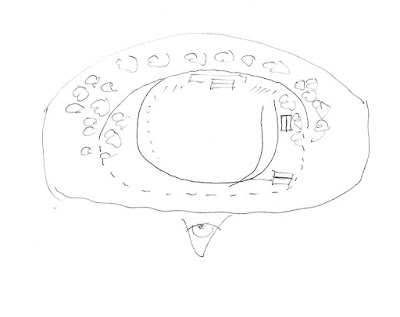 Note that the hidden loop is placed at the front, and the operating interest would really be focussed on the yard.