Hopefully though I'll get to Warley again this weekend. I have been known to forget the show is on before now.

I promised myself that I would get the signal box more or less finished before then, so here it is.

As usual things that looked OK at one stage have managed to warp, shift, unglue and generally mess themselves around behind my back. 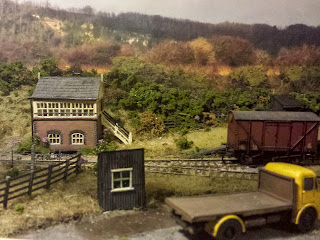 The guttering got twisted when I fixed the roof down, I'm glad to say that overnight it has sprung back into shape. I do like the Ratio product. 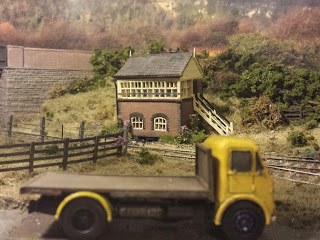 I really must straighten the fencing, which still isn't glued down and blend in the bridge. Under natural light the stonework has some nice subtle colouring  but it disappears under any artificial light. It needs be a bit browner anyway. The Glue 'n' Glaze in the windows of the AEC seems to have gone a bit matt as well.  The finials need another coat of paint. The stove chimney is taller than it appears here, but rechecking photos should still be a lot taller. 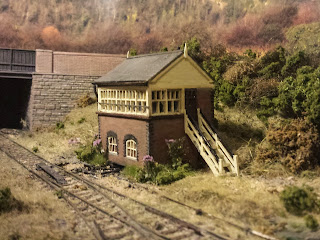 Retrofitting the Wills point rodding wasn't easy but I know how to do it better the next time. I must straighten that FPL cover. The combination of the square Wills rodding and the round MSE doesn't look right and I might still replace the MSE with Wills for consistency.  The one Wills component that I found jarringly overscale visually are the curved cranks. It is pity some signal pulleys aren't included. I've struggled with the etched versions on the market and would love to know of some alternatives.

Still I'm generally happier with it than I was earlier this week. Guttering, finials, and the safety bar in front of the windows have all improved it, I think.

This shot has a more natural perspective. I'noticed when I took this that I'd forgotten to put the tree back in. I took it out allow so I could work on the signal box area. Having now put it back in again I've realized it is another of those individual elements that have a big impact on the composition of such a small scene. 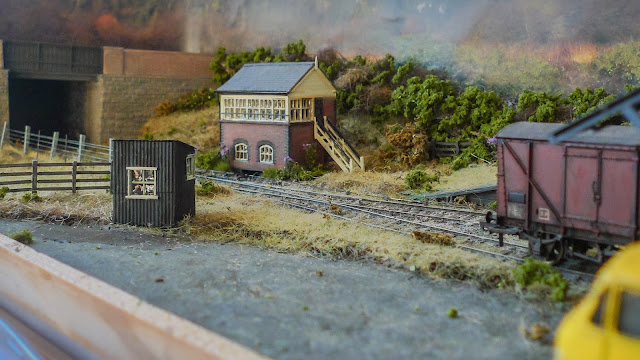 I don't need to mention that none of the interior is visible, do I?
Posted by James Finister at 13:46