Why do we go to model railway exhibitions?


I wonder how many answers there are to that question, and also how many of them survive close scrutiny.

I think the most honest answer I got today was from the chap who'd come up from Devon for the day and claimed, when I met him in mid afternoon, not to have seen a single layout because he'd spent so long chatting to people.

It is purely coincidental that I met him at the bar, and that they had run out of anything that might be properly considered beer.

I'm still thinking of my own answer.

In the past I'm fairly certain I would have said it was to see for myself layouts I'd been impressed by  in magazines, and to learn from other modelers.

There is still an element of truth in both of those points, though I've lost count of the times I've been disappointed by a layout that looked stunning in carefully stage designed photos and many times in the past any learning I've done has been by observation, not by engaging in anything more than the most superficial conversation.

I have to say that I find operators more and more willing to chat as I get older. I wonder if that is because layouts have become generally more reliable giving the operators more bandwidth, or if it is a generational thing. Certainly the heritage layout on display seemed to involve so much effort to operate that interaction with the audience was non-existent. Incidentally where but at a show like this would I get a chance to spend fifteen minutes discussing my tyro point building fears with Norman Solomon?

Show are also a great place to pick up bits and pieces from specialist traders, especially those small items that would attract relatively high p&p charges. Most of my purchases were related to track building and the switch to S&W couplings. What I forgot to buy were the underfloor bits and bobs for the MK1 coach. It was good to meet the people behind Lcut Creative as well, and to discuss their design philosophy.

It is easy to forget that a perfectly acceptable reason to go is to actually enjoy just looking at the layouts. I have to say though that every year I go to Warley I get the feeling the layouts I most enjoy watching aren't the ones that appeal to the masses.

So what about the layouts this year?

Frankly I thought they were disappointing. So rather than last year's quite comprehensive review I'm going to focus on three layouts in particular, with a few honourable mentions for others.

Let me get the three negatives out of the way first.

Paul's pre-Warley blog about backscenes should  have printed out and handed to the builders of most of the layouts at the show. The lighting at the NEC is interesting at the best of times, but when combined with a lack of decent backscenes it makes photography a real chore. Hence many of the photos that follow are tightly cropped, and I've converted them all into black and white.  I'm not sure whether no backscene is better or worse than a bad backscene that looks like an afterthought. This isn't just about photography either. It is hard to immerse yourself in a layout when distracted by things in the background.

Secondly, is it now compulsory to have so many working lights scattered around a layout, all set at maximum intensity so that it looks like a Xmas tree?

Thirdly why do layouts have to be crammed full of cameos and things going on? Mike Cougill wrote a thoughtful piece on the power of empty recently.

Selsey was a good example of this. I really struggled to find a shot that didn't include something that I was meant to find interesting or amusing. Every individual item was modeled to an impressive standard but the sum was less than the parts. I eventually found an area at the back of an engine shed that was relatively low key. 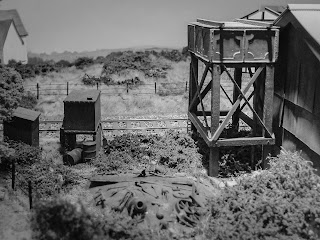 The OO9 Glyn Valley Tramway layout demonstrated this tendency as well. This is a line close to my heart and has been on my to do list in O16.5 ever since Stephen Poole bought out what is now the Peco GVT loco kit, and Roy Link published his GVT in 8'x10' plan in the Modeller. This layout caught some of the atmosphere quite well, but wherever you looked there wasn't just one thing going on but several. and the overall impact went from being a model of a prototype location to being just another hackneyed OO9 layout. Again I managed to get just one shot that avoided the worst excesses. Even so a traction engine and a steam lorry are in shot, though the horses don't seem bothered. 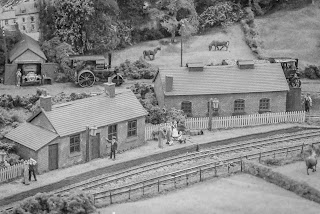 Cameos can work. Take this for example from one of the layouts whose name I've forgotten. Though even then I think it only needed one of the two pairs of figures to be effective. Don't get me started on extremely low relief factory buildings as backdrops. 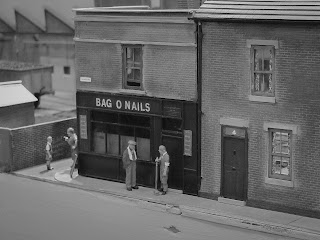 Rolvendon at least used the cameos to evoke a time and place, as with the hop growing scene. 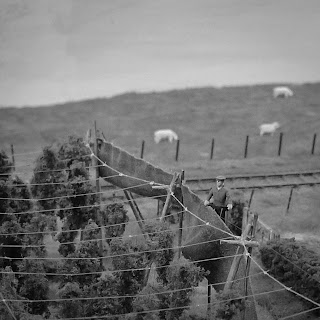 At times wandering around the layouts I thought it was like so much that has been achieved in the last thirty years has been forgotten. At the same time it was sad to hear so many people dismissing Borchester Market on the grounds that "anyone could do that now". I don't think in its current condition the layout quite captures the full Dyer legacy, but the one thing it clearly does is represent a working railway. 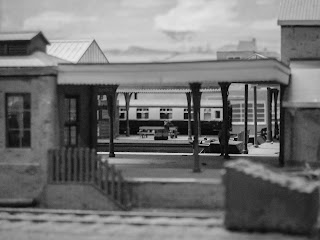 A good example of what the typical modeler of today could expect to produce was the simple Aldbury Town, although if you are going to use P4 I would query the use of so many kit built buildings

In the past those of us in the UK used to envy continental modelers the quality of the out of the box products they had available, but deride their toy train approach to layouts. Year after year I think Warley shows how outdated that view is and as usual many of the layouts I spent longest  looking at were not of or from the UK. 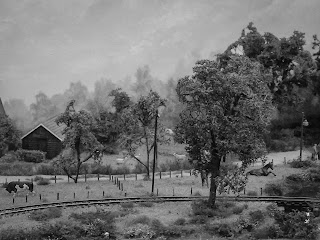 I was particularly impressed with  aspects of Thanasee-Cabusart although it was hampered by the narrowness of the baseboards. 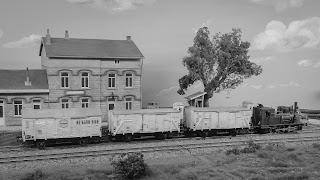 Now for the three layouts that I went back to time after time. Conveniently two of them were co-located, and not only that they were models of the same prototype. I'm referring, of course, to Peter Kazer's Corris, and Rod Allcock's OO9 Corris 1930. I still remember how blown away I was when I first saw Peter's model and in many ways I think it is still one of the finest narrow gauge layouts ever built. But gosh, how it needs a backscene when at an exhibition like this. Rod's version, and his locos, show how OO9 has matured and is a brilliant interpretation of the real life Corris to make a visually appealing layout. It is a pity they were forming two sides of an L so it wasn't possible to see them both together at the same time. Had I been more structured I would have tried to take  similar views of both layouts for a comparison. Peter's version dominates the photos simply because it was easier to get up close to. 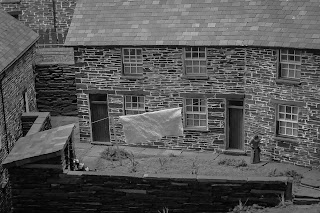 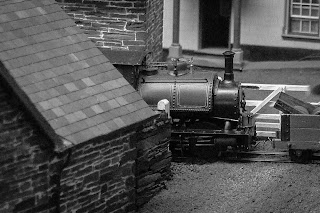 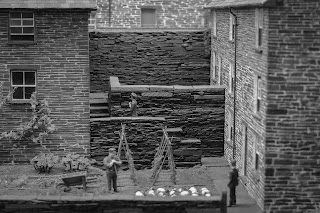 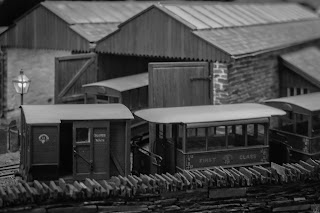 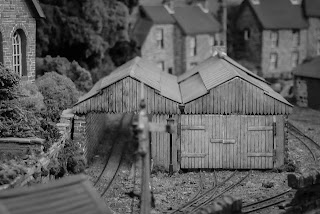 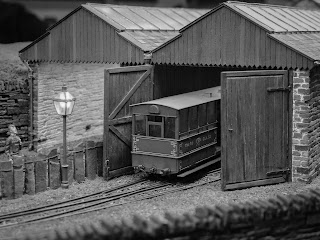 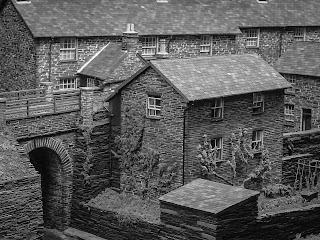 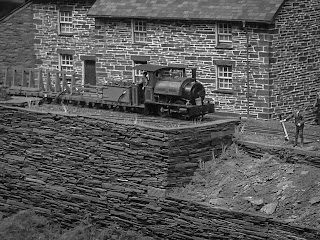 So that leaves one layout to discuss, which was my favourite of the show, and the title of this post has already given that away. Since this was supposedly its last appearance I've left it quite late to see Albion Yard  for the first time. I'm glad to see it lived up to my expectations . When a layout is already so well photographed you might question the point of trying to take photos of it in the less than ideal conditions of an exhibition hall. But I couldn't resist! 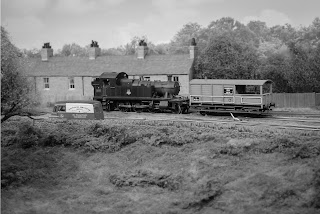 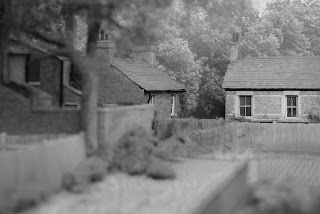 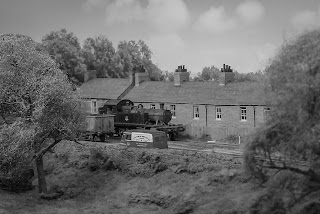 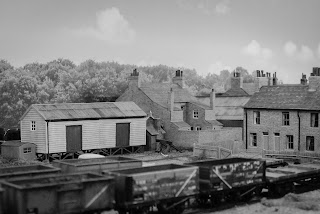 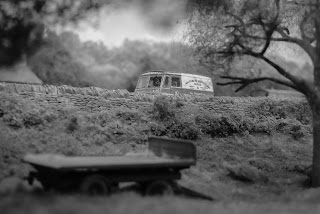 And finally perhaps my favourite shot of the day: 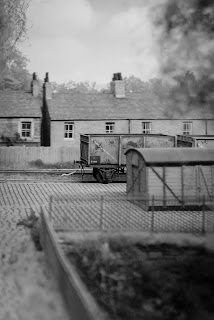