Whilst the 7 1/4" gauge has been progressing nicely I can't help worrying about the impact storage in our damp sheds is having on all the carefully accumulated bits and pieces intended for Llanrhaiadr Mochnant and TAoC. On top of which I'm obviously no longer used to working on a small scale.

In an ideal world I would now be established in a new office/library/den/layout room, but that is clearly still a far off prospect given our other priorities. However this weekend we are planning to have our first big change around since moving in, and part of the plan is for my beloved to temporarily move her office into another room. That will free up space to bring some bookcases, and indeed books, into the house, and also to provide a modicum of space for a layout.

We really are talking about it having to be another micro-layout, so my thoughts are beginning to drift towards narrow gauge.

The recently released  Oxford Diecast "Hutchinson"is currently sat on my desk as a reminder both  that I've always had a soft spot for OOn3, and also of the period of my life when I spent a lot of time on the island. It even briefly tempted me to consider an OOn3 version of TAoC. It might still end up mounted on a small diorama based on either Colby Level or Ballabeg . 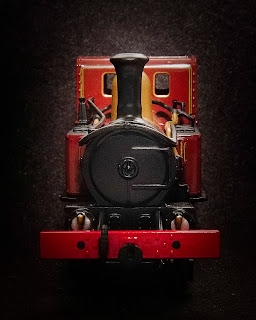 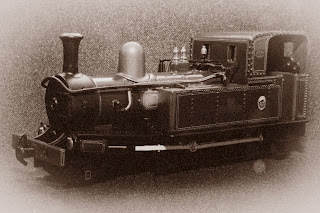 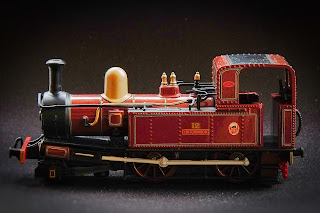 The Dave Brewer Challenge this year is for a layout based on a point and three lengths of track, which sounds like my kind of layout. So I think even if I don't enter the actual competition I'm going to build something that conforms to the rules. One option is a Gn9 layout based on my own Eaugate Light Railway, but the other is a OO9 model of the early days of Cadeby.  I'm really quite tempted by the latter, if it wasn't that Narrow Planet seem to have sold out of all the locos that would suit it.