At some point shortly after moving here I managed to lose my copy of the Oakwood Press book on the Lincolnshire Potato Railways - just at the time when it would have been most useful. 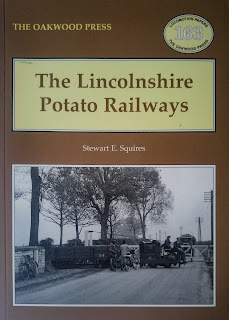 Finding a replacement was made more difficult by the ridiculous prices being charged on well known sites. Fortunately sanity finally prevailed and the price dropped form hundred of pounds to under fifteen pounds.  It also meant I got the newer 2005  edition.

Another plus is that I am now familiar enough with the area to be be able to turn the black and white maps into something a little more... I would say  3D...but anyone who knows the area knows even in real life it is mostly in 2D.

I remembered enough of the book to already know where some of the lines had run, such as Vine House Farm, and Nocton, of course. In some cases it has been a surprise to discover that lines existed in places I'd already visited with no idea .

And then there is this, on the A17 just South of the Fendyke Bridge. I've driven past it a few times and wondered if it was a fuel tank linked to one of the tramways. These weren't used for the locos themselves, but the railways supplied them for fuel to be used by the tractors.


But it turns out it isn't.

Turn around 180 degrees though and you come across this, which I'd never noticed

Two of the loading banks from the Lawyers Farm line can also still be found around Holbeach St Matthew.

At other places traces are harder to find.


Here  you can just make out what was a loading dock on the Wraggmarsh House railway, and that agricultural shed to the left is where the line's good shed used to be. At the end of the muddy lane to the left was the well known Cauldwell's Jetty on the River Welland, served by the steam tug Leo.

Finally I believe this is the location of the front cover picture of the book.