A load of Cobbles

I'm increasingly aware that I'm using Flemish Quay to try out ideas for an eventual Kings Lynn/Great Yarmouth based layout. So one of the things I wanted to try out was replicating the cobbles on King Lynn's Purfleet Quay. 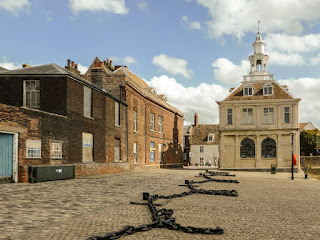 Being observant people you will have instantly noticed that there are actually two different types of sett laid next to each other.  I didn't, which explains why I got very frustrated trying to match photos.  Incidentally, I've also since found out these are a relatively modern feature.

My original plan was to use Intentio cobbles, but I decided to play safe and go with Redutex setts. Out of the packet, on the righthand side, these are an acceptable grey colour. You might quibble about the light mortar, but a dark wash would sort that out. 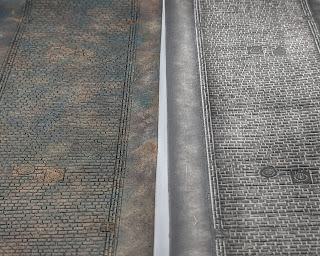 On my left is my first attempt at matching the prototype, whilst also making them look a little less cared for. Essentially it is various shades of cheap purple and brown acrylics applied with makeup sponges, then unified with a black wash. Before the wash was applied it looked somewhat startling. Once in place I'll apply some sandy washes to tone it down even more, and pick out the drain covers in a darker colour.