Work on Flemish Quay has been subject to a little delay. We had the big family "Xmas" over the New Year which kept me tied to the kitchen as head chef and bottlewasher, and then it was back to the day job.

A break does give you a chance to review progress, so I've decided to change one or two things and add some extra detailing that I wasn't initially planning on since I wanted to keep costs down. The big driver has been trying to maintain a consistent palette of both colours and textures, based on those of the Hornby building. So even more Redutex sheets are being utilised.

I made some major miscalculations about the height and location of the Petite Properties Harpers Yard building. So that means major additions to both the structure and the foam baseboard.  Overall I think this has actually led to visual improvement as well. The origin of the building is less obvious and it does a better job of disguising an awkward corner.

I've also begun some remedial cosmetic work on the forge itself. It isn't a bad model, but there is a lot of unpainted brickwork on it around things like the drainpipes, the mortar courses are bright yellow resin, and the roof tiles are far too uniform.  Oddly the yellow mortar is less obvious than you would think. 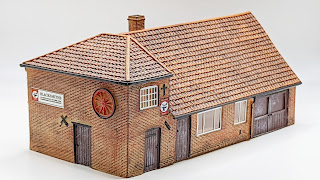 What I have discovered is why they have printed the windows white, rather than the brown of the prototype. As soon as you paint them the thick resin interior suddenly becomes very obvious

Having mentioned Petite Properties it is worth calling out some of the other suppliers I've used, especially the ones that have provided a great service over the holiday break.

ScaleModelScenery are a great source of low-cost details, especially where they are background items, like bicycles.

Modelu are the source of the very few figures that will appear on the layout. If I didn't happen to have a supply of parts in stock I would have also used them for a lot of architectural details.

Anyscale is a less well-known supplier with some useful and cheap resin cast details, though you do need to to choose carefully from the range.

Then there is my local model shop, Masons Models in Spalding who are my supplier of stripwood and paints. It is a good all-round model shop, and I always feel guilty that my modelling interests are too specialist to make more use of them.

Rails of Sheffield have proven to be a fast and reliable source of Redutex sheets. I'd more or less given up on this range, partly because of supply challenges, partly because I find them just a little too thick.

Finally, there are NGTrains/EDM Models who are my source for blue manual point "motors".

Now since Flemish Quay doesn't involve any paintwork, why would I need point controllers ;-)